Wait, WHAT?! Queen Dragged to Jail for Sexual Assault 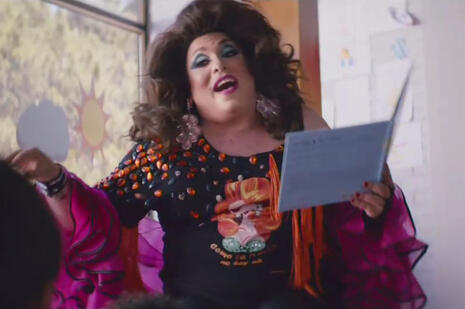 My grandmother always said, “If you can’t take the twerking, stay away from the drag show.” Or maybe it was about heat and kitchens? Anyway, it’s the same point Brock Thompson’s July 1 piece in The Washington Blade (“America’s LGBTQ News Source,” which is a far better slogan than “Democracy Dies in Darkness” since, for all it know, it’s true.) And while anything titled “A Queer Space Disrupted” would normally cause violent and potentially dangerous eye-rolling, Thompson was absolutely correct in his conclusion.

Something untoward happened at a drag show in D.C. last week. Here was Thompson’s description:

Now, cue the dramatic string section. “A queer life was disrupted. A queer space was disrupted,” Thompson wrote. It was “deeply upsetting” to “have a drag queen of color arrested during Pride month, after performing her act, on Juneteenth?” It’s all heart-rending, I’m sure.

But here’s the part where Thompson was right: He quoted “Kabuki Bukkake’s drag mother, D.C. drag staple Shi-Queeta Lee,” saying “everyone knows what a drag queen is by now.” Indeed, they’re inescapable:

At this point, going to a drag show, there are bound to be surprises, but any audience member knows more or less what to expect — and that is lewdness, the mocking of gender and sexual boundaries, drag queens practically playing jump rope with the lines of decency. And isn’t that what we come to see?

Maybe it is. I’ll take Thompson’s word for it.  He says some people blame “RuPaul’s Drag Race” for expecting a PG rated show, or “the inexplicable prudish mindset of Gen-Z, pointing to the ongoing ‘No Kink at Pride’ controversy.” Damned gay puritans!

But the point stands: if you don’t dig the pervy stuff, don’t be there. Drag performers, Thompson said, are “already pushing gender boundaries by performing in front of you.”

Lines are blurred, flirted with, redrawn, openly mocked. But you can see the boundary if you try. That’s what drag is for. That’s what makes it so compelling. If you can’t respect it, can’t respect the queens that perform, then don’t enter that space.