Senate Compromise Framework Encouraging for Americans Who Identify as Infrastructure

On Thursday, President Biden announced an agreement that will create a bipartisan compromise senate bill that would allocate $579 billion in new spending on infrastructure. Should it pass, it would mean the federal government will spend $1.2 trillion over eight years. 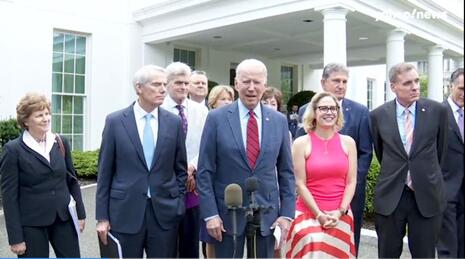 The importance of this compromise can’t be overstated. As a member of the infrastructure-positive community -- one who for too long has been “other” -- it’s gratifying to have our needs discussed openly. Being our authentic selves -- whether a port facility, a sewer system, a fiber optic network -- is costly but ultimately worthwhile.

For too long those of us who identify as infrastructure have been neglected by short-sighted, penny-pinching politicians. We have lived in the shadows, feeling ourselves slowly crumbling. Without a substantial investment of tax dollars, infrastructure-identifying people suffer alone, often with devastating psychological and emotional damage.

The crisis is particularly acute in the transportation community, those who know they were meant to be roads, bridges, cloverleaf interchanges, etc. At-risk trans people are vulnerable in so many different ways. Roadies can develop sinkholes. Those who live as bridges are subject to freezing before others. And overpasses suffer casual violence from truckers who ignore posted safe clearance heights.

The senate infrastructure bill is therefore crucial for the health of this vulnerable population. I don’t know exactly what an individual share of the $1.2 trillion will be. (As an infrastructure-fluid person, my needs vary, depending on whether I’m feeling like a dam, an airport, or an electrical substation.) But I do know that no amount of money can make up for the hurt, bigotry and hatred infrastructure positive people have suffered.

And I know that there is a long way to go before we achieve equity and the kind of loving acceptance we deserve. But I envision a day when infrastructure-positive people win architectural awards, when dignitaries flock to our ribbon-cutting ceremonies and eye-in-the-sky traffic reporters warn commuters to avoid us due to a jack-knifed tractor trailer just past our onramps.

The compromise is a down payment on a bright future for infrastructure-identifying Americans.

Matt Philbin is an infrastructure-positive American. At the time of this writing, he identified as a water treatment plant.