How could this fail to sell beer? Take two unattractive, unfunny, big-mouth celebrity liberals, put them in an unfunny, unimaginative political campaign format, have them talk down to the audience with some tired lefty talking points, and watch sales soar! 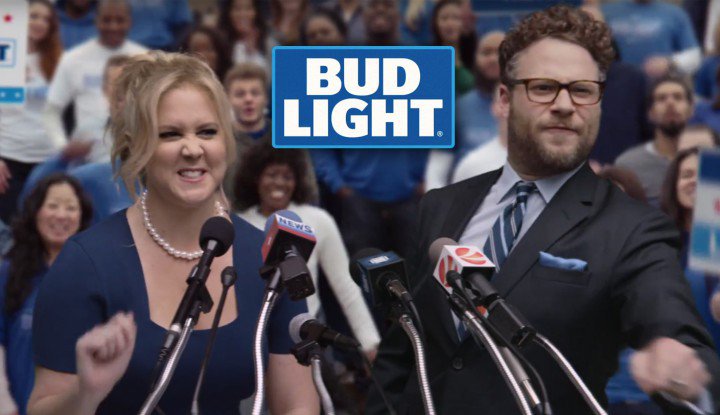 Anheuser-Busch is mercifully pulling the plug on its “Bud Light Party” campaign featuring Seth Rogan and Amy Schumer. (Really, was Michael Moore unavailable?) The campaign debuted during the 2016 Super Bowl, and immediately made audiences nostalgic for the Shakespearian wit of the Bud Bowl. According to Adnews, “In the end the campaign ‘talked a lot without saying anything meaningful,’ to paraphrase Kidsleepy.”

The hope was that this campaign would rally the younger potential beer buyers to the brand, and lure them away from the microbreweries and Pabst cans, to stop the continuing decline of sales Bud Light is suffering. However, the brewer reported today that Bud Light sales to retailers fell by “mid-single digits” in the third quarter. The brand lost 0.65 points of market share in the third quarter.

Pandering to a specific demographic by insulting the larger public may get community organizers elected president, but it doesn’t sell beer. Who knew? As Adnews concluded, “What was intended as a big humor campaign fell flat, because in 2016 audiences want their politics and their comedy separated.” That goes for their sports, too.