On Sunday (the Sabbath, of course), The Washington Post took time out from prostrating itself before Hillary Clinton to give a boost to the Fallen Angel. In a long. front page middle finger to Christians, the Post hyped the efforts of the Satanic Temple to introduce After School Satan Clubs to America’s elementary schools.

Oh, don’t worry. The worldly secularists at the Post aren’t suddenly practicing the occult. “The Satanic Temple doesn’t espouse a belief in the existence of a supernatural being that other religions identify solemnly as Satan, or Lucifer, or Beelzebub,” author Katherine Stewart assures readers. Goodness no! They’re far too postmodern and ironic for that. “The Temple rejects all forms of supernaturalism and is committed to the view that scientific rationality provides the best measure of reality.” 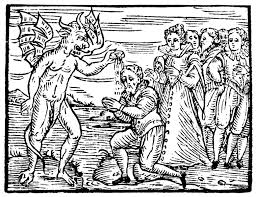 No, Satan Clubs are just a secularist lampoon. They’re meant to insult Good News Clubs, after-school evangelical Christian programs that meet in public elementary schools and that Stewart calls “the Temple’s true foe.” And her own, it seems. According to her by-line Stewart “is the author of The Good News Club, an investigative book about public education and religious fundamentalism in America.”

Good News Clubs are sponsored by the Child Evangelism Fellowship. When in 2001 SCOTUS ruled the purely voluntary groups couldn’t be excluded from schools because of the religious beliefs of the CEF, “the CEF then went on a tear, and by 2011, it reported 3,560 Good News Clubs, putting them in more than 5 percent of the nation’s public elementary schools.”

“The blend of political activism, religious critique and performance art that characterizes the After School Satan Club proposal is not a new approach for the Satanic Temple,” Stewart crows. It managed to get an Arizona town to abandon prayer at town meetings, and tried to get a statue of a demon erected at an Oklahoma courthouse. In that case, it was in response to the abomination of having the 10 Commandments displayed.

It’s just another militant secularist group like Freedom From Religion, angry that people believe. The Satan Club effort, by the way, depends on volunteer teachers (sure enough, Stewart found one in Tucson) “To cover After School Satan Club costs, including facility use fees and curriculum materials, the Satanic Temple is launching a crowdfunding campaign.”

So, for those keeping score at home, the Sunday Post front page has one secular activist flacking the unfunded attacks of other fringe secular activists on Christians. Now that’s a value-add for Post readers, making it just a little sweeter watching the stupid neighbors across the street pile in the car for Church.