Over the course of three separate articles, the magazine incapable of embarrassment treats the Second Amendment like an embarrassing personal issue and veers into PC buzzword land. A “gunsplainer,” as defined by Cosmo, is, “Someone (usually, although not always, a guy) who buys into myths propagated by the gun lobby. A small-but extreme-subset of gun owners that dominates conversations on gun violence.”

Thank goodness the sophisticates at Cosmo are immune to gun lobby myths. They might contradict the myths they buy from Michael Bloomberg and his Everytown gun-grabbing organization. Cosmo Editor-in-Chief Joanna Coles, coincidentally, is chummy with the ban-happy former NYC mayor, and recently fielded a question from CBS This Morning on his presidential ambitions.

And nobody fears inanimate objects like Hizzoner! Add to that modern feminism’s Perpetual Outrage Identifier and Cosmo readers learn that the NRA and gun-owning louts are conspiring against them.

See, it turns out nothing in life is certain and laws and government sometime fail (!) There are holes in the background check system. “That’s why Cosmopolitan and Everytown are partnering for a campaign called Singled Out, to raise awareness among unmarried women of the risk for gun violence and the gaps in the law.”

Cosmo explained the disparity in gun ownership between the sexes and the grave danger women face merely by being proximate to firearms. Weapons are three times as likely to be owned by a man than a woman, according to a 2013 Pew Research Center report, Cosmo’s Liz Welch pointed out.

Welch encouraged women to confront their partners about their guns. “Bringing up guns can be awkward, but as with abortion and STIs, you should know where your partner stands,” she said. Because in the end, there’s little difference between a constitutional right and herpes. 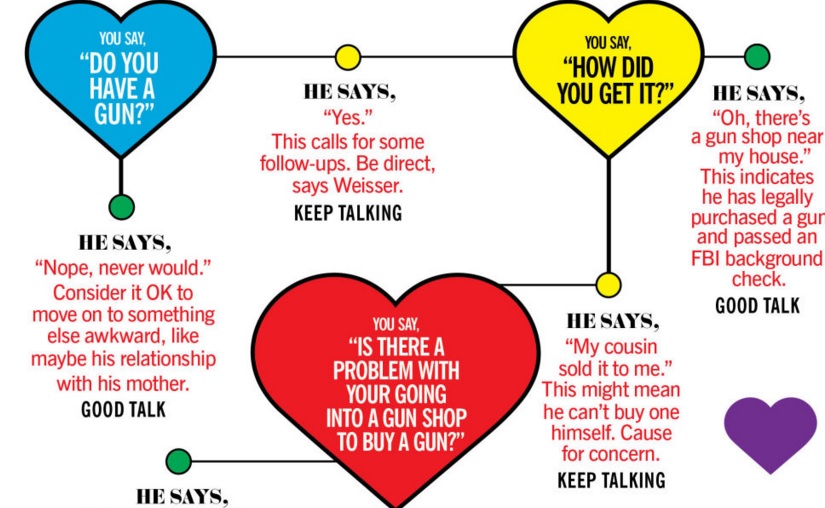 Welch gave two outlandish examples of gun violence against women by their partners. A 22-year-old girl was shot to death by her Russian national ex-boyfriend who had already threatened her and whom she had filed a protective order against 10 days earlier. Also, an Eastern European stalker bought a gun privately and shot an American woman he met online.

So women should fear Slavic guys? Nope. Just their guns, and all the sneaky ways they have of getting them. Online sites like Backpage.com, private gun shows, and sales between friends have contributed to people who would not pass a background check being able to purchase guns.

The “boyfriend loophole” also poses problems. If he hits his girlfriend he will be convicted of a misdemeanor but can still buy a gun. Gun control advocates want to add “boyfriend” and “stalker” into the language of domestic abuse laws to prevent this.

None of this addresses a simple fact: the only way to tackle all these issues is a 100% ban on gun ownership. It’s not something most anti-gun liberals talk about openly, but for many it’s a cherished dream. Let’s face it, Nurse Bloomberg tried to initiate a full ban to combat the scourge of large sodas in NYC. Would he really think twice about gun confiscation?

The National Rifle Association, on the other hand,  said it would be better to update the information in the FBI’s background check system but not expand it. “Why would we want to expand a system that does not work?” asked NRA media representative Catherine Mortensen. “A lot of times, domestic-violence perpetrators are going to get their guns through some illegal channel anyway.” Just the way many other kinds of perpetrators do. Criminals are notorious for being unimpressed by laws.

“The question more rightly is, how do you stop people from being abusers? It is not about guns,” Mortensen added.

But Cosmo said it is, citing domestic abuse hotline callers who were threatened with or just intimidated by guns in the home. The article pointed out some “Red Flags” that a gun owner might turn violent, such as if a woman has just left an abusive relationship or if the guy is a jealous drunk. Of course, you should probably also be wary of an abusive, jealous, drunken guy who owns a knife, a car, a 3-iron, heavy statuettes or a frozen leg of lamb.

Obviously, domestic abuse and murder are very serious issues -- perhaps too serious for a magazine that spends most of its space on creative ways to reach orgasm. Number two on Cosmo’s “Red Flags list is “He has threatened you with his gun.” Really.

Considering that Cosmo feels the need to point out that being threatened with a gun is a “red flag” for gun violence, it’s ironic that condescension is a big part of what it dislikes about “gunsplainers.”

A “gunsplainer” will “condescend to you about why you’re safer in a world where guns are easier to buy than Sudafed, or how a good guy with a gun is the best antidote to a bad guy with a gun,” wrote Cosmo’s Prachi Gupta.

That gunsplaing jerk “may sound like National Rifle Association Executive Vice President Wayne LaPierre, who said in 2013, ‘The one thing a violent rapist deserves to face is a good woman with a gun.’”

Gupta had a comeback for that, and if you you weren’t paying attention, it may almost sound on-point. When a “gunsplainer” says “‘She wouldn’t have been shot if she’d had a gun,” a woman should say, “‘It’s cruel to second guess a victim. Homes with guns have more violence, no matter who owns them, studies show. And not all women would want to own a gun. We all deserve protection.’”

First, it’s unfortunate the Gupta’s imaginary Gunsplainer doesn’t have more tact, but accusing your own cartoon creation of cruelty does nothing but obscure the issue. But the rest of Gupta’s retort to Gunsplainer was just as stupid as his statement. She cited research that argues that woman’s weapon is often turned against her, and says guns in the house lead to homicide of women (this includes suicide). Of course, none of the research covers instances where gun ownership has deterred violence. How do you quantify instances of violence not occurring? It doesn’t mean they don’t exist.

The only certainty is that a woman without a gun has less chance of protecting herself from an attacker, whether he’s armed or not. A woman trained in self-defense, and proficient with her firearm stands a far better chance against an attacker. (And yes, Cosmo, there are women who manage to drag themselves away from buying edible lingerie to get trained up -- many even enjoy it.)

There are two unrelated but important facts that Cosmo would prefer to ignore. The first is he continued decline of gun murders in the U.S. There are more guns than ever before (by a lot), but they’re being used for crime less and less.

Second, gun ownership is no longer an all-male club. Upwards of 45 million women own their own guns a 77% increase since 2004. Tens of millions more have access to guns in their homes.

Both of those facts undercut the arguments of Everytown and other gun grabbers. But the second one -- women exercising their Second Amendment right -- should have them scared.

There probably are places where laws and the background-check system can be improved, but short of a 100% ban and confiscation, government action can’t completely eliminate gun violence.

And merely having a gun around does not precipitate violent behavior. Guns don’t victimize women. Some men with guns do, as do plenty of men without guns.

But admitting those truths means abandoning cherished notions of victimhood, something Cosmo and Everytown aren’t prepared to do.