For journalists, it was the best of popes and it was the worst of popes. News outlets were often negative when Pope Benedict visited the United States in 2008, calling him an “enforcer,” “God’s Rottweiler,” and “very conservative.”

Not so this time around for Pope Francis. The current pontiff shares the media’s views on climate change, immigration and inequality, and seems ambivalent at best about capitalism. Even better, his language on certain social issues has been less than precise, leading them to speculate that the Church might change its teaching on homosexuality, contraception and other near-and-dear lefty issues.

In short, the media suspect Francis is really one of them. 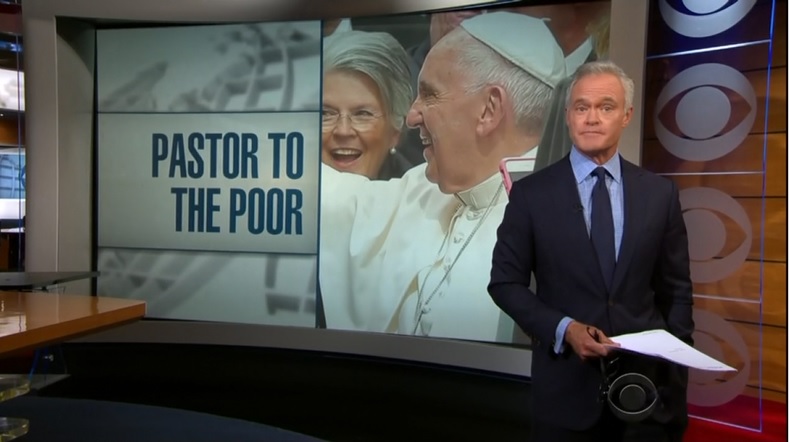 After their initial harsh criticism, journalists were either disinterested with Pope Benedict or damned him with faint praise. Thompson called him “a man first thought to be a placeholder in papal history.”  ABC’s Dan Harris wouldn’t even credit the pope with being “chipper.” It got a qualifier. Pope Benedict was only “rather chipper.”

Harris was also obsessed with downplaying Pope Benedict’s charisma. In an April 15, 2008, World News with Charles Gibson broadcast, he knocked “Pope Benedict's relative lack of charisma when compared to his magnetic predecessor, John Paul.” The next night, Harris referred to Pope Benedict as “perhaps not as charismatic as John Paul.”

But Francis, Tom Brokaw assured NBC Nightly News viewers on Thursday, is a “charismatic figure,” and “moral authority,” whose speech to Congress was “the kind of performance that presidents and would-be presidents would envy.”

Francis is, in Brokaw’s formulation, “the humble man with the powerful voice.”

The current pope’s humility seems to be really important to Scott Pelley as though Benedict had conducted himself like Donald Trump after assertiveness training. Francis getting into his Fiat at Andrews Air Force Base was “a most humble beginning,” Pelley said on CBS Evening News. Francis, “the humble pope,” had “posed selflessly for a selfie.” During a visit to Catholic Charities in DC, people were “inspired by the pope’s humility.” Later, as Francis rolled down New York’s Fifth Avenue, Pelley described it as “The humble pope on the most expensive street in the world.” Meanwhile, CBS graphics called him “Pastor to the Poor.”

At ABC World News with David Muir, Francis fanboy Terry Moran also called Francis “the humble pope,” a “champion of the poor,” and enthused about Francis’s orthopedic shoes and not wanting to spend much on new eyeglasses. As a bishop in Buenos Aires, Moran said, Francis didn’t hang out “with the rich and famous. He liked to be out in the barrios and ghettos.” All of which cause anchor David Muir to marvel that Francis is “very relatable.”

Francis is also, in Moran’s words, “happy” and “invigorated” by his U.S. visit. What’s more, Francis “answers his own heart in the moment.”

The same Anne Thompson that called Benedict an “enforcer” saw only sunshine and unicorns this week. “While the Vatican is often perceived as an institution of ‘no,’” she told Nightly News viewers, “this pope says ‘yes,’ emphasizing the positive, embracing people – eager to be among his flock.”

“Simply by being himself,” she gushed, “he has changed the image of the Church.”

All of that may be true, but it’s also true that being perceived as a liberal has made Francis a media darling – and you can tell by the networks’ interviews with people from the crowds. CBS interviewed a woman from Massachusetts who said, “We are supporting him because of his stance about inequality and his support for immigrants, and protection of the planet. NBC found a woman who thrilled to Francis’s “beautiful message about how we can all come together to save the environment.”

Yes, and as long as those are liberal things, Francis will enjoy media approval his predecessors could only dream of.