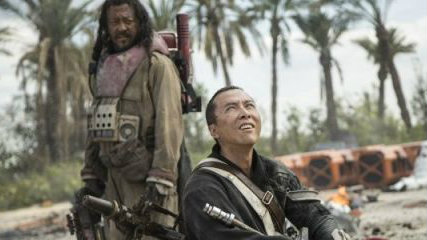 Shocker: there’s another Disney movie that the media wishes were more liberal than it actually is.

When J.J. Abrams hinted earlier this year that the latest Star Wars film could feature a gay character, and then GLAAD decreed that the franchise needed more LGBT representation, many in the media were elated and had high expectations for Rogue One. When the film was finally released last week, Chirrut Imwe and Baze Malbus were pegged as the characters that Abrams must have been alluding to.

Chirrutt, a blind monk devoted to the Force, is protected by his laser canon wielding friend Baze throughout the film. Though very little backstory is given, it is obvious that the two share what is arguably the closest relationship of any of the film’s characters. Which, in 2016, must mean that they are not merely best friends and brothers-in-arms, but a gay couple.

Aside from Abrams’ comment in February, the team behind Rogue One has not fueled this theory. But that hasn’t prevented the media from announcing the Chirrut/Baze romance as fact.

The Inquisitr headlined the issue with “’Rogue One: A Star Wars Story’ Finally Goes there: Disney Intros First Gay Characters.” The reporter celebrates the fact that the “expected controversy” over the inclusion of a same-sex couple “has been nonexistent.” Maybe because those who don’t see the world through liberal lenses didn’t see a gay couple?

A writer for Vulture agrees that the tender moments shared between Chirrutt and Baze are evidence that the franchise may have “finally introduced the gay characters that many fans have been clamoring for.” But he admits that “skeptics will accuse us of reading way too much into a simple friendship and its single affectionate gesture.”

Buzzfeed joined the bandwagon by documenting just how much the internet loves the “couple,” showing mountains of tweets, memes, fanart, and fan fiction “shipping” the supposed romance.

Other news sites, including Yahoo! and Independent, have also contributed to the idea that Baze and Chirrut are more than just friends.

Fusion alone has a beef with Disney: the characters could have been a gay couple, but they’re not. The site acknowledges that “in Chirrut and Baze’s case, whatever queer potential they have can only be realized if the audience wants to see it.” Only if people want them to be a gay couple can they be a gay couple. Unlike the rest of the media, Fusion is still waiting “for those queer characters J.J. Abrams promised us.”

This is not the first time that lefties have had their bubble popped over the exclusion of gay characters in movies. A twitter campaign was waged to get a girlfriend for Elsa in the possible Frozen sequel, and Vanity Fair lamented Captain America’s obvious heterosexuality.

Despite the media’s attempt to inject their agenda into everything, Rogue One provides hope that two lifelong platonic friends could be celebrated as much as a same-sex romance.