Batty 'Batwoman': Black People 'Shot For No Reason' by Police 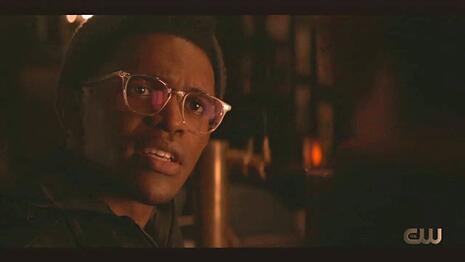 They’re still not done sneaking in not-so-subtle BLM messages in CW’s Batwoman, apparently. With only two episodes left in the season, Batwoman’s in a race against the clock to squeeze in this propaganda, so it looks like they’re opting for the completely false route with their politics now.

The June 13 episode “Rebirth” follows closely after last week’s episode where Luke Fox (Camrus Johnson) just narrowly survived a shooting by a Crows security agent. Although he’s alive, he’s less than enthusiastic about it, considering the shooter just made bail on bond and is free to walk the streets. In fact, he’s so angry about it, he takes to stalking the agent to a poker hall, neglecting his duties to Ryan/Batwoman (Javicia Leslie).

Ryan quickly tracks him down to chew him out, but he turns the tables on her for bringing him back to a world “where we get shot for no reason.” Ryan, being the ACAB superhero of this world, doesn’t respond.

Ryan: Poker? Really? We need you home. We think Safiyah's in Gotham.

Luke: Thought you and Safiyah were good.

Ryan: We are, but the guys who her lackey ran her sword through can't really say the same thing.

Ryan: Look. We will give you the space to do your thing, but we need a hand. In this family, we take care of each other first, right?

Luke: Every doctor in that hospital thought I was gonna die in that bed, but you and Mary slipped me the desert rose, and I woke right up.

Ryan: Ok. If there was a thank you somewhere in there, I—

Luke: I didn't want to wake up.

Ryan: How can you say that?

Luke: When I was under, I saw my dad, and, I mean, he was right there. Why the hell would I want to live in a world where we get shot for no reason, where the gunmen get out of jail free so it's not a matter of if there's another bullet coming, it's when? Why would I go through it when I can be with my dad again? I got to get back to my game.

The overwhelming majority of police shootings involve armed suspects or people resisting arrest, so police shootings don't just happen for "no reason." And talk of gunmen getting out of jail free makes sense if Luke is referring to the inner-city crime and gang bangers shooting people and getting turned back on the street thanks to lax bail laws. With the white male shooter and hatred of police apparent in this show, that’s highly doubtful.

Eventually, Luke does return to Ryan with a new thirst for justice. However, that doesn’t change the bold claim Luke made essentially saying he’s better off dead than alive as a black man because "another bullet" is coming. No wonder why the Black Lives Matter crowds tend to be so unhappy.

This show was sponsored by commercials from Colgate, Charmin, and T-Mobile. Their contact information is linked.