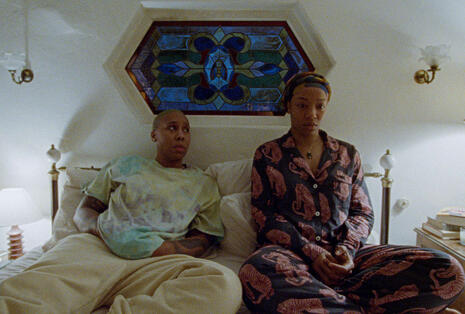 After a lengthy hiatus brought upon by the lead actor being brutally cancelled, Netflix’s comedy-drama Master of None is back with a third season. As one can imagine, the hateful series also returns with a bold declaration that America “ain’t” great.

The season, which premiered May 23, follows not our original main character Dev Shah (Aziz Ansari) but his old friend Denise (Lena Waithe) and her wife Alicia (Naomi Ackie). Over the course of five episodes, we watch them go through a miscarriage, grow apart, and eventually meet up again a few years later.

A good portion of their conflict comes from their decision to have kids in the first place. After some time, Alicia is able to convince Denise to let her get pregnant using their male friend’s sperm. They soon discuss the kind of toys their kid will play with, and that leads into the discussion of race. Alicia asks when they should introduce racism to their kid to which Denise replies, “Early,” since they can’t have their child thinking “America is great.”

Denise: We gotta be careful ‘bout the toys.

Denise: ‘Cause I was a lesbian straight out the gate. I wanted trucks, or Teenage Mutant Ninja Turtles.

Denise: Instead my mom came with a Addy doll.

Denise: It’s this thing called American Girl. So, they kinda teach you about history and shit. So they had to have a Black one.

Denise: And of course the Black one was a slave.

Alicia: You had a slave doll?

Denise: Yes, I had a slave doll. We had matching dresses. I was like, “Ma, are you not paying attention? I’m a lesbian.”

Alicia: Yeah, speakin’ of slavery, how are we gonna introduce our baby to, like, racism and shit?

Denise: We gotta talk to ‘em. We can’t have our kids talkin’ ‘bout “America is great.”

Alicia: I want our baby to be hopeful for the future but realistic.

Denise: We gotta start watchin’ Roots while the baby in the womb, so it comes out knowin’ the real.

I find it ironic that the series that can’t even hide its controversial actor thinks it can tell us what’s great or not. Not only does Aziz Ansari appear in two episodes, but he’s also credited with writing and directing every episode in season three along with actress Lena Waithe. These very successful people of color are now going around telling people America isn’t great for black or brown people. They shouldn’t be surprised when people don’t believe them.

Thankfully, this season is only half as long as the others, meaning only half the opportunities to get bored or angry.