Cancel Jeopardy? People Freak Out Over 'White Power Sign' on 'Jeopardy' (It Wasn't)

Next up on the cancel culture block appears to be the long-running game show Jeopardy. Why? Because a contestant dared to hold up three fingers on the air. Sadly, we are not making this up. 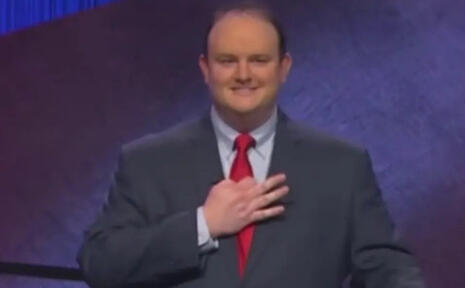 On April 28, more than 450 former Jeopardy contestants called attention to what they considered to be a “white supremacist” hand gesture made by the three-day champion Kelly Donahue during Tuesday’s episode. The grievance claims:

He held his thumb and forefinger together with his other three fingers extended and palm facing inward, and he tapped his chest. This, whether intentional or not, resembled very closely a gesture that has been coopted by white power groups, alt right groups, and an anti-government group that calls itself the Three Percenters.

As Donahue himself later explained (and the letter does acknowledge), this symbol was obviously a reference to his third day as champion as he gestured with one and two fingers in his previous games. He emphasized that there “wasn't a hidden agenda or any malice behind it” and if he won again “you'd have been treated to a 4." Of course, this common sense was still lost to the masses as Donahue was forced to delete his previous post and return with a groveling apology on Facebook. Jeopardy producers at this time have yet to make a comment.

The letter also accuses Donahue of using a “slur” by referencing the word “Gypsy” in response to a clue on Monday’s episode. Once again, while the letter also acknowledges that this does not seem to have been done with malice, the alums insist that the show must call this out and "disavow" it or be labelled as bigoted stating:

Ever since the Anti-Defamation League gave in to the 4chan hoax that white supremacists co-opted the OK hand gesture, paranoid social justice warriors have been labelling every harmless use of the once international gesture as racist. Never mind that prior to 2019 no one had a problem with it. Never mind that neither Jeopardy nor its contestants even showed a hint of supporting white supremacy. If you don’t agree with this, you’re “standing up for hate.”

Let the record show that even if you do something completely innocent like hold up three fingers, all it takes is a few angry Twitter handles to label you as a white supremacist supporter, even for a TV staple like Jeopardy.