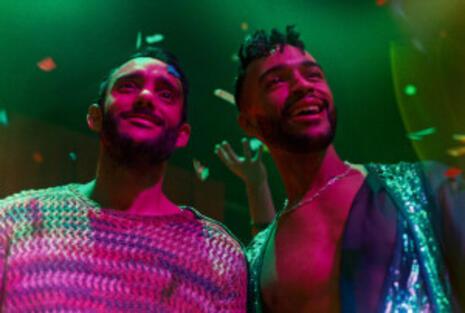 The March 7 episode “The Rapture of Burning” features our gay Muslim character Salim staying at an enchanted hotel. Here, everything is blessed by the Chinese deity of same-sex love which naturally means a lot of sex whether we want it or not. The place is even run by transgender manager Toni who remarks, “When I was born, everyone said I was a boy. Well, guess what? They were wrong.” How bold and brave.

Salim flirts with a gay bellboy named Kai (Noah J. Ricketts) who invites him to a party: “I guess you’d call it a pansexual adventure love-in where you can get your kinky boots on.” Salim’s initially hesitant about attending since he may feel “ashamed,” but Toni convinces him, saying it “may feel scary at first, but you'll be safe. I promise you. Maybe that's what God is offering you.” He enters the party, and that’s where the “fun” begins as he walks around in wonder at the mirthful spectacle.

Orgy scenes are hard to pull off. Punning aside, it’s a real issue when catering to the straight, white cis gaze to dramatize this aspect of queer culture and why it is essential. It’s rare for any media to appropriately capture how the experience shocks a person out of their assumptions of sexuality and morality, and why something that goes against everything about heterosexual society can feel like discovering themselves for the first time. I’m not saying American Gods manages it fully. Nor do I feel like everyone who watches this scene will experience it as the show means it to go over. But for the first time in quite a while, it does feel like the series is reaching for something more, something beyond the norm, a promise of beauty and truth that mainstream TV rarely achieves.

As expected, American Gods continues to be nothing more than a further example of "mainstream TV’s" decline.