The Black Lives Matter agenda must be intense if the 1980s aren’t safe anymore. In yet another example of pandering to the woke crowd, the ABC comedy The Goldbergs reminded its audience that “racism's everywhere.” BLM must be determined to leave no show untouched by its propaganda. 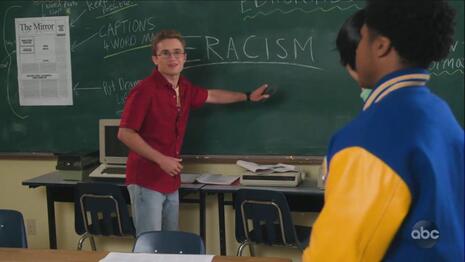 The November 25 episode “Eracism” starts with Adam (Sean Giambrone) being inspired after watching Do the Right Thing for the first time. Taking a cue from Spike Lee’s film, he’s spurred to tell everyone he knows about how racism is alive and well in Brooklyn. He even goes as far as to interrupt a school assembly from his teacher Mr. Glascott (Tim Meadows) to start a club to combat it.

Of course, nobody takes his outburst seriously, but sadly, not for the reasons you would think. In fact, his friends’ issue comes more from the fact that he’s too naïve about how racism is "everywhere."

Adam: What? Why not?

Brian: Because you said some dumb things that were also very stupid.

Adam: What's stupid about being concerned with racism in the streets and pizzerias of Brooklyn?

Dave: You don't honestly think that racism's only happening in a single borough, do you?

Adam: It's spread to other areas of New York? Have we lost Staten Island?

Brian: Yeah. It's in the school.

Adam: Really? I mean, our school's not exactly a model of diversity, but I've never witnessed any racisms.

Dave: Well, it's here. And you call racist acts "Racisms"?

Adam: I never said I was an expert. But, luckily, I have strong opinions. I was thinking our group's motto should be... "Eracism."

Dave: No! You have no idea what we deal with.

Brian: Like my English teacher only calls on me when we're reading "Othello." I mean, does he only ask the Danish kids to read when we're doing "Hamlet"?

Adam: Magnus mostly keeps to himself, but I see what you're saying.

Dave: And why does my home-ec teacher keep calling me Connie Chung as a joke?

Adam: Because Connie Chung is a national treasure?

Dave: No! I mean, granted, she is. Maury Povich hit the jackpot when he married her. But it doesn't make it okay.

Adam: I feel terrible for not seeing these things or doing anything to stop them. So many racisms.

Dave: Stop calling it that, but yes. And there's tons more. I've jotted down a few incidents.

Adam: Wow, that is a thick binder.

Fortunately, since the show takes place in “1980-something,” racism examples here are limited to lousy public school teachers as opposed to today's out-of-context police videos. Still, that doesn’t stop Adam from becoming more invested in stopping racism despite his apparent ignorance. For that, he blames his mother Beverly (Wendi McLendon-Covey) for sheltering him all these years from the truth about the world. While she argues that she wanted to keep him safe, he reminds her that “all you've done is keep me in the dark. Walls, Dave Kim, Mr. Glascott? They're confronted with this stuff every day.” If the show were any less subtle, it’d be a political ad.

While Adam can’t end racism overnight, he starts by advocating a change in their school textbooks to correctly label Martin Luther King Jr. in the Civil Rights section. The show then ends with Adam stating that “Truth is, real change starts with tough conversations, 'cause you have to face reality if you want to improve it.” If that’s the case, we’re never going to get real change from the left, or at least anyone who still says "Hands Up, Don't Shoot."

This show was sponsored by commercials from AT&T, Charmin, and Walmart.