We’re less than one month away from the election, so it’s time for the media to step up its political shilling for the Democratic Party. ELLE Magazine does its part by featuring Senator Kamala Harris (D-CA) as the cover story for its upcoming November issue. Well, we can’t say we weren’t warned. 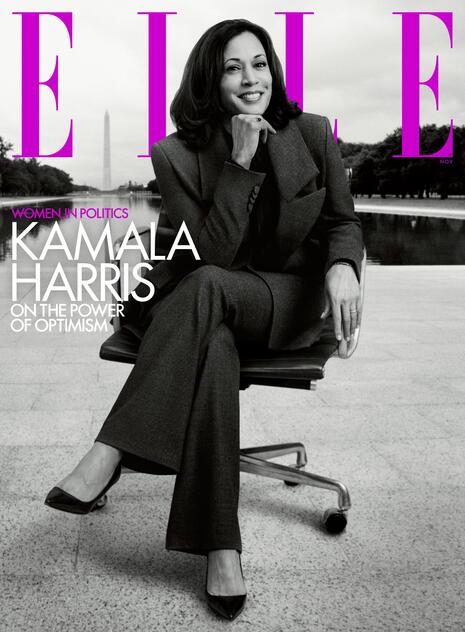 On October 6, the fashion magazine revealed its glossy new cover of the vice presidential candidate via Twitter. Like Michelle Obama before her, Kamala seems poised to take the position as the lauded, empathetic Black female figurehead rather than the cold, socialist-driven politician that she is. That is, she’ll take it with the help of the fangirls at ELLE.

Writer Ashley C. Ford's glowing interview starts it off by framing Kamala as someone “fueled by optimism” in her fight for justice. Ford wants to know "how she became a person dedicated to inhabiting inhospitable places and turning them into her home":

“The motivation comes from believing in what can be unburdened by what has been,” [Harris] says. “John Lewis, the dearly departed, like many others shed blood on that bridge. Because he really believed in what could be. It will often feel like [we are only] against something, but the motivation that carries us through, with any longevity, is knowing what we’re fighting for.”

Considering just one month ago she suggested not taking any COVID-19 vaccine created during the Trump administration, I have to believe that Kamala is most certainly fighting “against something” than for justice. In fact, the idea that we should ignore any progress in a vaccine simply because it was overseen by President Trump is hardly optimistic, either.

The profile only gets worse as it reaches into her discussion on systemic racism. Harris, of course, touts “the brilliance of the Black Lives Matter movement” in hopes of starting "difficult conversations" about race in America:

“What I hope and pray is that we can get to a point where, through what are undoubtedly difficult conversations, we confront the real history of America,” Harris says. “Doing it in a way that is motivated by love, but also is fully honest.”

If she were truly honest, she would acknowledge the billions in dollars done in damage by the BLM and Antifa rioters. Or the dozens of lives lost in the riots. Or how Jacob Blake, whom Kamala claimed to be “proud of” after being shot by the police, was charged with sexual assault and accused of violating a restraining order. Maybe this country does need an honest discussion about race, but it definitely won’t come from BLM. And it certainly won’t come from Kamala Harris.

Finally, this pandering cover story wouldn’t be complete without bringing up Donald Trump. Like most fake politicians, she uses children by bringing up an alleged incident involving her young godson on the night of the election.

“My godson, Alexander, who was seven years old at the time, came up to me, crying, and said, ‘Auntie Kamala, they’re not going to let that man win, are they?’ And you know the babies in your life.…” She closes her eyes and swallows. “I held him. I mean, it still brings me pain to remember how he felt, and what it made me feel, which is that I needed to protect this child. I had one way, in my mind, I thought the evening would go. And then there was the way it turned out. And so by the time I took the stage, I had ripped up my notes, and all I had was Alexander in my heart. And I took the podium and I said, ‘I intend to fight. I intend to fight.’”

ELLE Magazine is going to have to try a lot harder than that if it wants to help Democrats in the election. After all, magazine covers didn’t help Hillary Clinton become president.