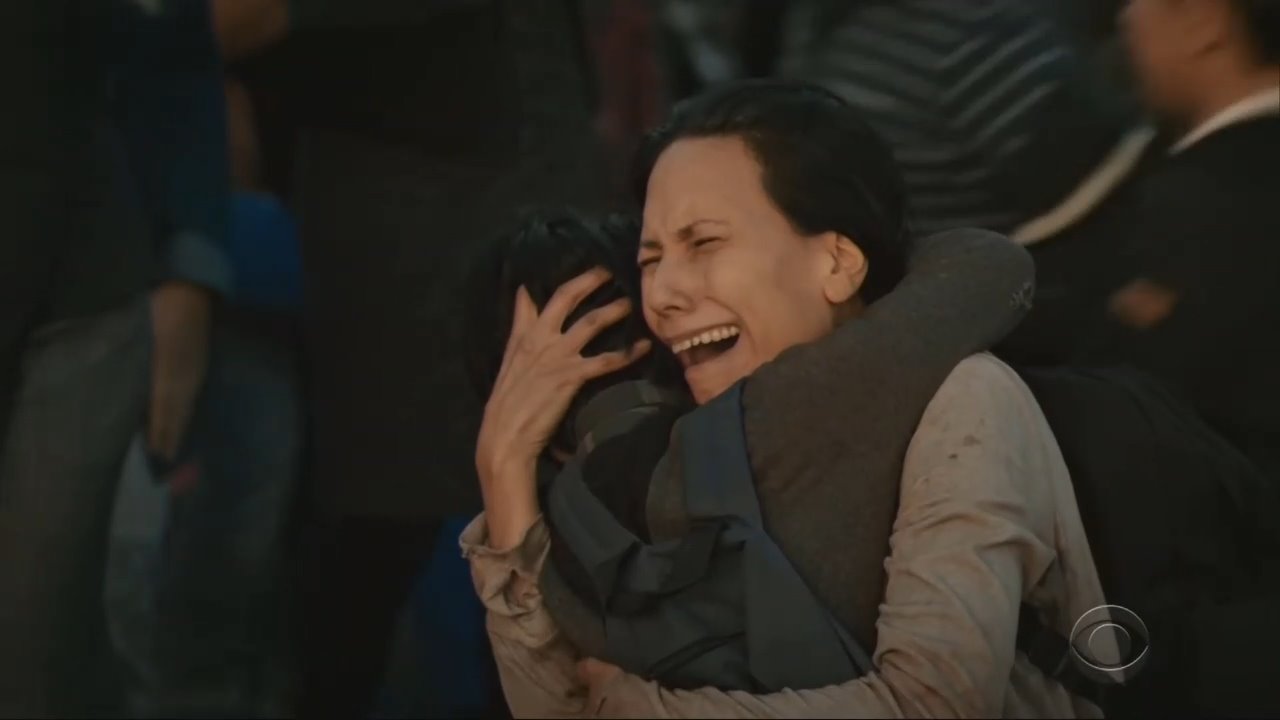 CBS’s Madam Secretary already conspired to spoil the holiday season by basing its 100th episode on family separations at the border. Now it returns to ruin the new year with another episode on the same subject. Somehow, it ends up more sanctimonious than a Golden Globes award winner. One of the characters in the show asserts that the separations are the "death of our democracy."

The January 6 episode “Family Separation: Part 2” takes place directly after the previous episode where Secretary of State Elizabeth McCord (Téa Leoni) was arrested. The crime in question is trespassing on an Arizona detention center against the wishes of Arizona Governor Richard Barker (Lee Tergesen) after she learns about his recent family separation policy at the state's border. Although she has the pull to make a deal to avoid jail time, she refuses to plead guilty to her crime. Instead, she vows to remain in jail until every family is reunited. She even proudly declares this in her trial hearing to the applause of her numerous fans.

Judge Collins: How do you plead to the charge of one count misdemeanor criminal trespass?

Mike: You know it's not too late to talk about this...

Elizabeth: Don't need to. Not guilty.

Harley: In that case, Judge, since defendant is not availing herself of our plea offer, the People would like to proceed with one charge of felony criminal trespass.

Judge Collins: Understood. How do you plead to that, ma'am?

Elizabeth: Not guilty. Sorry about him, Your Honor.

Judge Collins: I've had worse. Now... out of respect for your position as Secretary of State, I order you released from custody immediately on your own recognizance, no bail, provided that you promise to appear for all future courtroom proceedings.

Elizabeth: No, Your Honor.

Judge Collins: Excuse me, ma'am, are you refusing my... my orders?

Elizabeth: I-I mean no disrespect, Your Honor. But I'm going to refuse to leave prison until all the detained children are reunited with their parents.

Elizabeth: And, Your Honor, if you don't mind, could I just say a couple of words before I... go to jail?

Judge Collins: Go for it.

Elizabeth: No one should rest until this inhumane practice is stopped. All Arizonans, all Americans should make their voices heard. In fact, I am certain that if every American could see what is happening inside the Arizona State Detention Facility in Sasabe, they would do everything they could to end it. Because this is not who we are. Thank you, Your Honor. I appreciate it.

Judge Collins: Okay, then. Trial date's set for one week from today.

I can’t imagine Hilary Clinton, whom Elizabeth clearly emulates, going out on a more pretentious send-off. The series has somehow turned “Lock Her Up” into an empowering storyline, and it’s nauseating. Even worse, this is still surrounding an issue the show clearly knows nothing about, at least in terms of actual facts.

Meanwhile, the Dalton administration struggles with the aftermath of Elizabeth’s choices and how to deal with the border crisis. Although White House Chief of Staff Russell Jackson (Željko Ivanek) laments the tarnishing of Elizabeth’s image and their political losses, Elizabeth’s husband Henry (Tim Daly) argues in favor of the moral fight. He then begins to compare the family separations as the “the bellwether of a crumbling democracy” on par with Nazi Germany, Ghana, North Korea, and shockingly they include Iraq under Saddam. There’s even a subtle shot against Donald Trump as "a self-promoting, D.C.-hating, malignant narcissist" in the process.

Russell: Not exactly how we drew it up. Cable news is losing its mind, and this may very well be the meme that breaks the Internet.

Russell: Yeah, what else is new? I'm sorry, but this is what happens when a self-promoting, D.C.-hating, malignant narcissist gets his paws on a national issue. And we should have anticipated it!

Henry: The arrest is drawing attention to the issue.

Russell: Oh, fantastic. The families are still separated. The Mexican border deal is-is dead. President Zaragoza is talking U.N. Resolutions against us and practically sending troops to the Arizona border! And our once-popular, future-president Secretary of State is behind bars! I'm not sure how much attention all that's worth, Professor.

Henry: Russell, history has taught us that we must confront injustice head-on when we find it. That's exactly what Elizabeth is doing.

Russell: What, by wandering miles beyond her mandate as Secretary of State? Literally!

Henry: I would argue that what she is doing is precisely her mandate. She swore to uphold the Constitution. Arizona's separation policy represents an institutional erosion of civil and human rights. It threatens our way of life.

Russell: I don't like what Barker's doing any more than you do, but there's more than one way to skin a cat. Mainly, not in jail!

Henry: Jail might be precisely the way to skin this cat, because it is noisy. Look, the bellwether of a crumbling democracy is always a violation of human rights. Look at Nazi Germany. North Korea. Ghana under Kwame Nkrumah. Iraq under Saddam Hussein.

Russell: I think it's a little premature to be lamenting the death of our democracy.

Henry: That is exactly what everyone said in those countries as human rights eroded.

Russell: All right, fine. But your wife is torching her chances of becoming president and saving our franchise from lunatics like Barker. Those mug shots won't exactly look good on a campaign poster, but you can bet her opponents will be printing them up on T-shirts!

Their situation is made more complicated when an Arizona officer records and releases footage of the detention center. Inspired by Elizabeth’s statement, he proclaims to “stand with Secretary McCord” and let the country know what Governor Barker has done. From the publicity, the country begins to side with Elizabeth regarding the detention centers, giving the administration enough leverage to argue for the release of the children.

Of course, Arizona Governor Richard Barker (Lee Tergesen) remains just as stubborn against the administration. Even when discussing with the president himself on the moral issue, Barker refuses to yield. If the previous episode didn’t paint him enough as a Trump surrogate, this scene bludgeons us with the comparison.

Dalton: Public opinion is turning against you, Governor. The latest snap poll taken in the last hour shows that 90% of Americans are against family separations.

Dalton: Fair enough. But I think we can agree that your sheriff took things too far by arresting Secretary McCord.

Dalton: Clearly, we don't see eye to eye on much. But how about this? I can offer you a seat at the table with a coalition of border governors to provide meaningful input on the border security deal with Mexico. We both know that that's what this is really about. And I'm willing to compromise, providing you reunite the families and release Secretary McCord today. Let's get past this ugliness and work together.

Barker: You think my base wants compromise? I get 10,000 folks at my rallies in Tucson. They are tired of namby-pamby politicians willing to sell their souls based on the latest poll. Now, you want a deal? Here it is: Rip up that feckless immigration bill you signed over the summer, and then we can get real about border security.

Dalton: You know that's not going to happen, Governor.

Barker: Then I guess we have nothing to talk about.

Dalton: Son of a bitch.

Fortunately, Elizabeth’s team manages another legal way around the Arizona law. Her chief of staff Jay Whitman (Sebastian Arcelus) manages to convince the right-wing jerk Senator Morejon (Josë Zúñiga) to support a bill releasing the children from the state’s captivity. His argument? The Senator can maintain his anti-illegal immigration base by supporting a marijuana legalization bill. Now this episode ends up being both pro-illegal immigration and pro-marijuana. Strangely, that hasn’t been the most outrageous development in this episode.

In the end, Elizabeth is freed, the families are reunited, and nothing can stop the Secretary of State from her inevitable run as the first female president. With the image she has, I won’t be surprised if she runs for first female Pope.

I tackled practically all of the issues regarding family separations at the border in the previous article, but it sadly needs repeating. The issue of family separations at the border was not a recent development. Some separation is necessary to prove that children are indeed with their real parents. Most detention centers for illegal immigrant children don't involve anything resembling cages. Leftists like those on this show are the only ones who need reminding on these facts.

Even with all that in mind, the episode takes the self-righteous propaganda angle at every turn. Elizabeth is a political martyr for the rights of illegal immigrants. Governor Barker is a morally bankrupt slime ball for even suggesting border protection. There’s even a scene when Elizabeth’s advisor Kat (Sara Ramierez) convinces her father to become a U.S. citizen since she’s “not sure” if a green card matters legally these days. It’s like no one in the series has ever seen life outside of CNN.

Fortunately, the rest of us have reality and facts to fight against such lousy characters. I’d suggest the series join the rest of us once in a while, but they have a fictional campaign coming.