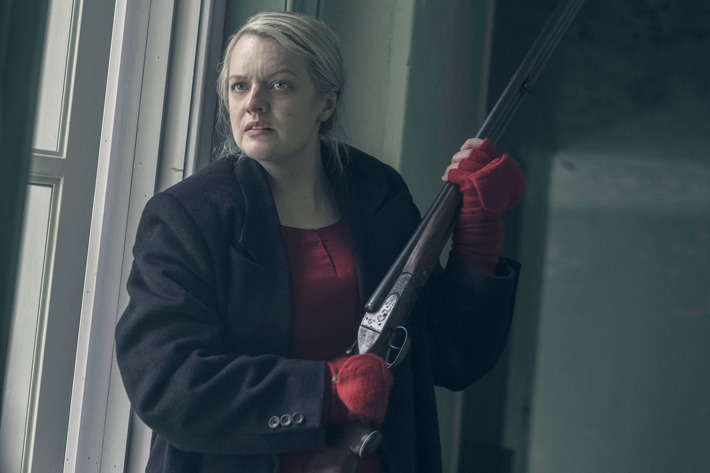 Hulu’s The Handmaid’s Tale is becoming more bizarre by the episode, but this week is probably the peak of silliness this season. After child brides, whipping women, and denouncing campus speakers, season two now proudly presents us with voice of the Resistance, Oprah Winfrey. Houston, I think we’ve jumped the shark.

The plot comes down to the wire in the June 27 episode “Holly” as June (Elizabeth Moss) finds the keys to a car in a vacant house. She turns the car on and hears a broadcast from the rebel channel Radio Free America on the radio, voiced by none other than Oprah Winfrey. That’s right, Oprah is now the voice of Gilead resistance.

Announcer: Radio Free America broadcasting from somewhere in the Great White North. And now, this news. The American government in Anchorage today received promises of economic aid from India and China. In the United Kingdom, additional sanctions on Gilead were announced as well as plans to raise the cap on American refugees relocating from Canada. Now, a tune to remind everyone who’s listening, American patriot or Gilead traitor: we are still here. Stars and stripes forever, baby.

At least in some universe Oprah Winfrey can be the #Resistance leader liberals desperately want her to be. And it’s no surprise that a Bruce Springsteen tune comes out as a new symbol for this movement. What could be more American, they might ask? My answer: just about anything.

Addendum: It's pretty fascinating that this episode manages to have June find a gun and be willing to defend herself against her oppressors. It's almost like guns are the great equalizer. However, that just begs the question of why would NRA members, especially the female ones, let the government just come and kidnap their sisters, mothers, and daughters to create Gilead? Once again, whatever world The Handmaid's Tale takes place in, it's certainly not Earth.