The Washington Post has since corrected its story, placing it under the headline: “Nancy Pelosi shut down a reporter’s abortion question in a press conference.”

The story then concluded with this: “Correction: An earlier version of this story incorrectly referred to the questioner as a protester. The question came from a reporter from CNSNews.com, a conservative news site.”

Reporters who dare to ask pro-abortion politicians if an unborn baby is a human being are now being called “abortion protesters” -- by the liberal media, that is.

At a press conference Thursday morning, journalist Sam Dorman from MRC’s news division, CNS News, asked Rep. Nancy Pelosi a question about abortion. For daring to challenge the abortion-supporting House Minority Leader, reporter Kelsey Snell of The Washington Post misrepresented the CNS reporter as “an abortion protester” in her headline and story of the event.

A conservative journo asked Pelosi abt what constitutes a baby being alive: Pelosi, "I'm a mother of 5, I think I know more abt this than u" 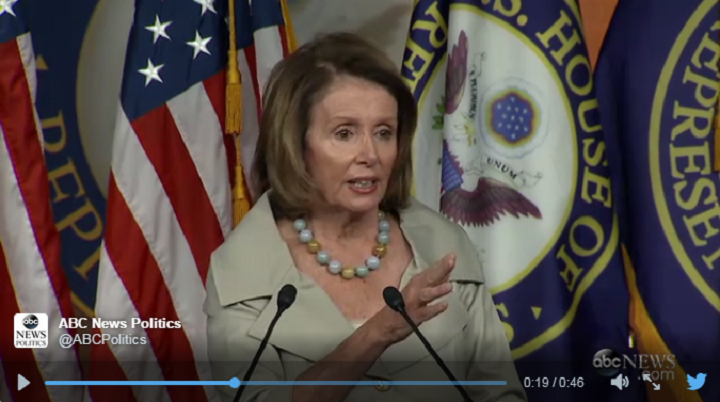 Here’s the full Q and A between CNS and Pelosi:

CNS: "Leader Pelosi, in reference to funding of Planned Parenthood, is an unborn baby with a human heart and a human liver a human being?"

PELOSI: “Yeah. Why don’t you take um, take your ideological questions … I, I don’t have--Look--”

PELOSI: "No, No, No [tries to shush the reporter.] Listen, I want to say something to you. I don’t know who you are. And you’re welcome to be here, the freedom of the press.

I am a devout, practicing Catholic. A mother of five children. When my baby was born, my fifth child, my oldest child was six years old.I think I know more about this subject than you, with all due respect, I do not intend to respond to your questions which have no basis in what public policy is that we do here."

WATCH: @NancyPelosi battles reporter over her abortion views: "I think I know more about this subject than you." https://t.co/Em7uj1lRR9

Snell has to know that only credentialed press are allowed to attend these weekly press briefings, but she glossed over that in her story. She called the reporter a “protester” several more times in the article while snarking that, “It was unclear who the questioner was and for which news organization they worked.”

She added, “It is not uncommon to see protesters in the Capitol or for news organizations with an ideological perspective to attend press conferences.”

While Snell’s sloppy journalism was showing through, ABC News correctly called the CNS staffer a “reporter.”

Dorman tweeted at Snell early Thursday afternoon. “I am not an anti abortion ‘protestor,’ he said. “I am a credentialed member of the press. Please correct your story.”

She merely responded, “I've let the editors know of your request.”

As of five hours ago, the headline has not yet been changed. Some media outlets, like The Hill and liberal Salon praised Pelosi, saying she “shut down” the reporter:

WATCH: Pelosi shuts down reporter on abortion: "I know more about this subject than you" https://t.co/lxDn0vnuaj pic.twitter.com/Itl7sNzEwV

How does the writer know it was an "anti-abortion protester"? Seemed like a completely legit question to ask. https://t.co/Uq70DMlfYW