Hollywood proved last night on Twitter that it's not famous for its brains. Here are ten of the stupidest responses from actors and comedians on what they thought about CNN's GOP Debate. 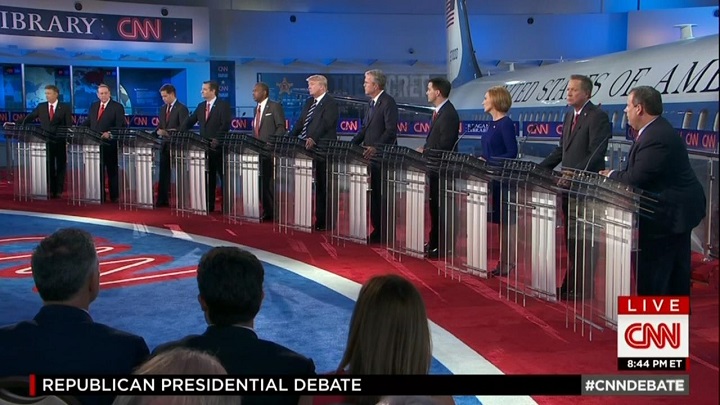 The initial response ranged from confusion to mockery:

Watching the #GOPDebate on set and we're all very confused. pic.twitter.com/3Od13uMtcC

Comedian and writer for The Tonight Show with Jimmy Fallon, Mike Drucker, made this joke in poor taste:

Nothing weird about all the candidates standing in front of a giant phallic symbol with the word "Reagan" written on it. #GOPDebate

I had Chinese food for lunch today, and I'm cutting farts with more nuanced approaches to foreign policy than the GOP candidates.

The only thing that could make tonight more insane is if the Plane behind them took off and a Zombie Reagan ate their bodies. #GOPDebate

Comedian Kathy Griffin bashed the GOP as racist and "scary":

Wow, these #GOPDebate candidates are scary. They can dress up their rhetoric however they want, but, um they just hate Mexicans.

Oh, and defunding Planned Parenthood will bring America back into the Dark Ages apparently:

"Wah wah women have vaginas we don't own." #GOPDebate

Comedian and actor Arsenio Hall managed to make a joke about abortion and Governor Mike Huckabee in one fell swoop:

"Blob Of Tissue" should be the name of Gov Mike Huckabee's autobiography!

But what was more insane was the GOP's response to the issue of global warming:

It is beyond maddening, depressing and disgraceful that the #GOP can't get on the right side of #globalwarming

Some celebs managed to weigh-in on a debate they weren't even watching!

On the other hand, some celebs were charitable:

From uninvited, to unanimous winner of #CNNDebate #CarlyFiorina2016 Glad the "experts" are finally learning what some of us knew all along.

In no particular order... I thought Rubio, Fiorina, Jeb & Christie were the strongest tonight. I like Carson too! #RepublicanDebate