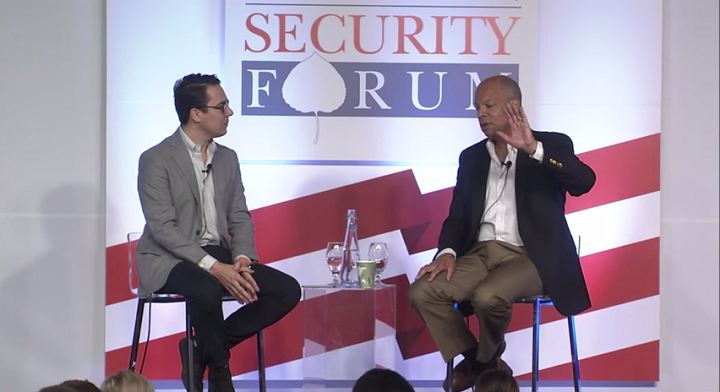 It can only be described as both ludicrous and insensitive. Just days after a Muslim terrorist shot up two military recruitment centers, killing five servicemen in Chattanooga, TN, DHS Secretary Jeh Johnson told the media and high-ranking government officials to not mention the word “Islam” when talking about ISIS or terrorism.

Johnson made these comments at a national security conference July 23. Ryan Lizza, Washington correspondent for The New Yorker, moderated the event centering on the U.S.’s strategy for Al-Qaeda and ISIS.

Lizza asked Johnson, “Why do you, and the Obama Administration, describe this as violent extremism and not – and refuse to use the phrase – Islamic extremism?”

Johnson responded, “I believe strongly – and I hear this over and over again from Muslim leaders in this country – that to refer to ISIL as ‘Islamic extremism’ concedes too much. It dignifies them as occupying some part of the Islamic faith, which is about peace.” Really, he pulled out that old line.

He further stated, “And so if you call it ‘Islamic anything,’ uh, we are dignifying this terrorist organization with occupying a part of the Islamic faith which Muslims in this country I know, push back very strongly on,” Johnson said. “So If I went into these [Muslim] communities calling it ‘Islamic extremism,’ I’d get nowhere.”

Lizza pushed back, “Isn’t the government denying the fundamental religious component of this kind of extremism by not using the word, ‘Islamic’?”

He added, “To some people, it sounds like political correctness.” To most people, really.

“I could not disagree more,” Johnson retorted.

He stated, “ISIL, I think, would like to be referred to as ‘Islamic’ extremism because it therefore concedes that what they are saying and what they are doing occupies legitimately as some form of Islam, which is about peace.” That’s right, Jeh, keep saying it and someday it’ll be true!

Johnson then went on to state the alternative to identifying Islamic terror as Islamic:

“And so here domestically, I think it’s critical that in order to build our relationships and build our level of cooperation with the Islamic community here. Um, we have to say to them ‘Look, we understand that what this depraved terrorist organization is doing is no part of your religion.”

ISIS must be reeling at the Obama administration’s superior knowledge of Islam.

Johnson’s comments last Thursday came just one week after four marines and one navy corpsman were killed by Muhammad Youssef Abdulazeez. According to CNN, Abdulazeez had sent a friend a text message moments before the attack with an Islamic verse that read, "Whoever shows enmity to a friend of mine, then I have declared war against him."

The administration and the networks have long avoided associating Islamic terrorism with Islam.

Instead of ‘terrorists,’ ABC, CBS, and NBC prefer to call Hamas ‘militants’ or ‘fighters’ at a rate of 9-1 over ‘terrorists.’

During the holy month of Ramadan, ISIS implored other Muslims to join them in using the religious observation as a reason to commit more acts of terror. Despite this, 87 percent of the time the networks refused to make the connection.