In honor of Mother’s Day this year, three magazines promoted the story of how one son “gifted” his mother with death. And no, it wasn’t a joke.

Esquire first published the story, followed by Redbook and Cosmopolitan (all conveniently owned by Hearst Magazines). All three outlets gave the story, written by Alex Schlempp (with Patrick Pacheco), the same headline: “On Mother's Day, My Mom Asked Me to Help End Her Life.” Schlempp detailed his journey to find a way for his mother to commit assisted suicide, and justified his actions by calling it “mercy,” “the right thing” and the “best gift.” 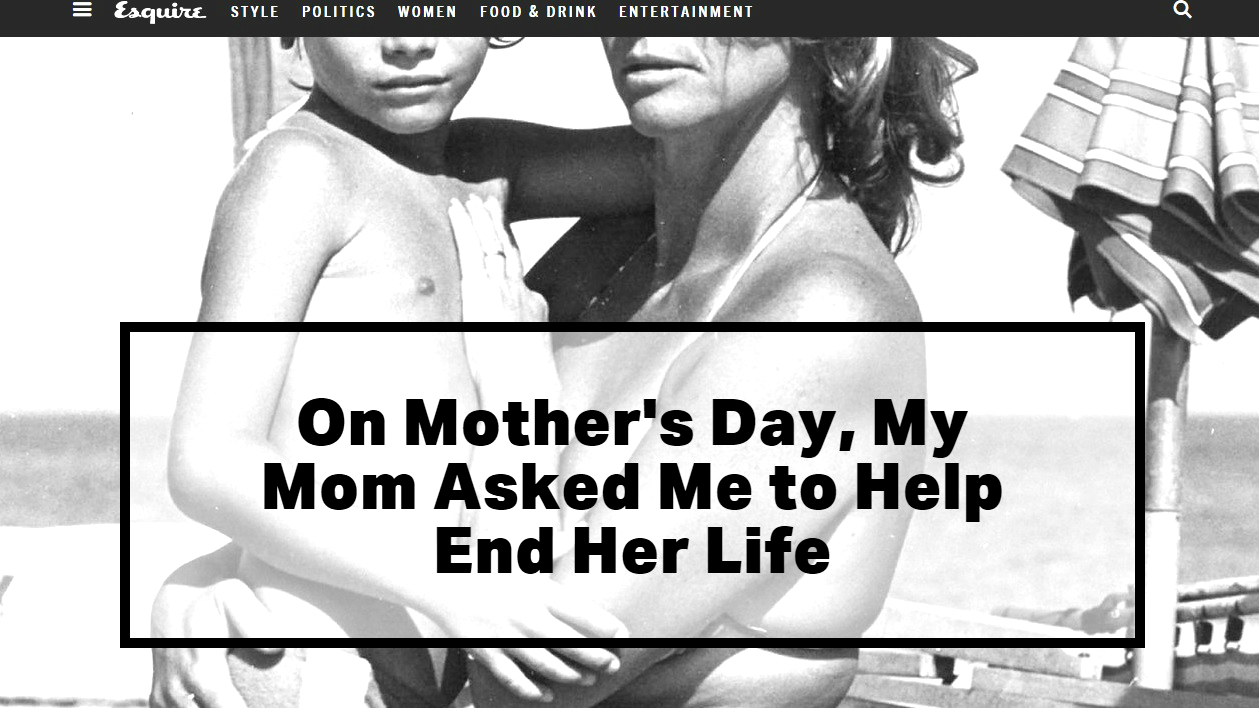 It’s a questionable story for one magazine to publish. But when three magazines –  with three different audiences –  are in on it, there’s no mistake that Hearst Magazines is shoving a fatal agenda in readers’ faces.

Schlempp introduced his story by recalling his mother’s special request on Mother’s Day in 2015.

“Giuliana, my mother, at 75 years old still spirited and stunning, says, ‘Alex, you have to make this happen,” he began.

Diagnosed with pancreatic cancer, his mother had four to six months left to live, an oncologist estimated.

“[W]hat level of misery suffered by a loved one makes support for such a decision not an act of negligence but one of mercy?” he wondered.

He explained her reasoning for assisted suicide: so that she could “die on her terms” instead of alone.

Because his mother “could be very stubborn and irrational,” he stressed, he “needed to be sure … this was something she wanted to do.”

He found “comfort” in “two thoughts,” he said: “Everything will be fine and, in my darker moments, Perhaps a bus will hit her and we will all be spared.”

While his mother was mentally sound, he said, she still had her worries: “that she will botch it if she tries herself; and that ... taking her own life is a sin.” But she thought God would permit a death OK’d by a doctor.

Although his mother could die in the United States, she picked Europe, the place of her birth, where she thought “the process will be more efficient.”

As they searched for options, Schlempp, together with his sister, worried that their “capricious” mother might “change her mind” and give them “emotional whiplash.”

When his mother found out that the “vetting process” for the lethal drug pentobarbital, used in assisted suicide, could take four months with the first organization they considered, she became “irate.”

Feeling “exasperated,” Schlempp asked his mother, "If this is so important to you, why don't we just do it here and be done with it?"

In a heartbreaking reply (in more ways than one), she admitted, "I don't have the courage.”

As her cancer progressed, Schlempp became more determined to find a way for his mother to die sooner rather than later. 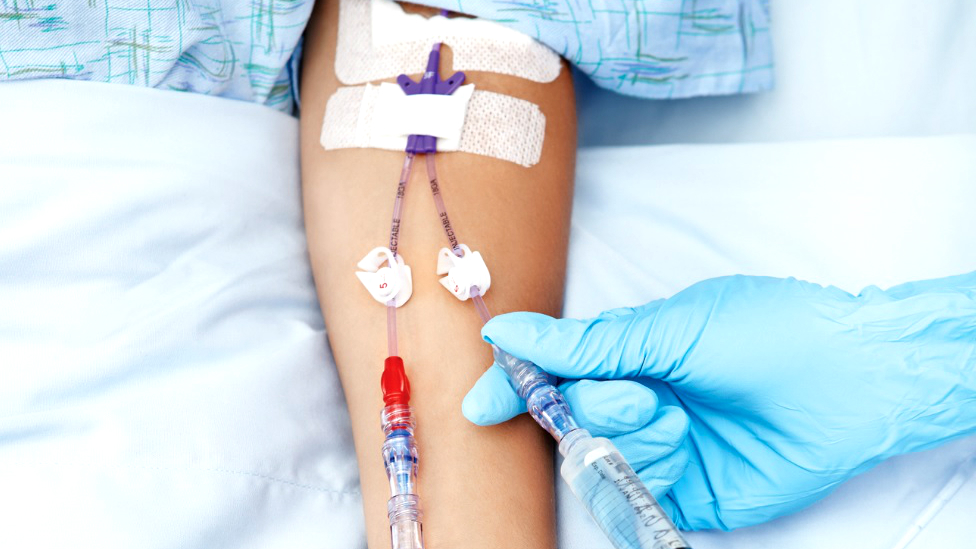 “Watching her suffer, now all too visible, crystallizes our decision,” he said. “Her self-inflicted end will not be a mistake; it will be a mercy.”

They found another organization with no waiting period – but had other problems that stopped them.

While his mother was “devastated,” Schlempp and his sister felt “resignation” and “relief” even though they “know” that finding a way for their mother to die is the “right thing to do.”

“[W]e've fought the nagging thought that children should not put their parent to death,” he said.

But still, he found himself with “the realization that even if her life is extended, it will inevitably lead to protracted, extreme suffering.”

“Shepherding Giuliana to her death has gone from being a burden to being the last, best gift we can offer,” he continued, calling her by her first name throughout the piece.

After his mother had supported him as a gay man, he felt a special connection and responsibility to her, he detailed in a side story.

Unlike the other places, Schlempp found it “professional” and efficient” with a goal to “ethically and efficiently put to death a person without sacrificing their dignity.”

While “in a reflective moment” as her death neared, his mother asked, “what she should expect when death sets in.”

Schlempp first reacted, “How the fuck do I know?” before contemplating on a quote by novelist João Guimarães Rosa: "People do not die. They become enchanted."

On the long flight to Switzerland, his mother needed an oxygen mask which made both of them “freak out.” The incident made him tell his sister at the airport, "This has got to happen.”

Schlempp then told the end of his mother’s “enchantment,” in other words, death.

At first, she only wanted Schlempp and his sister present because she “worried that seeing the others will cause her to lose the courage to release the medication.”

“But she is clearly afraid of the final moment,” he continued, before saying he persuaded her to allow other family to attend.

After answering a series of questions from a nurse confirming she wanted to die, his mother was ready.

With the pentobarbital added to the saline in an IV, she “rolls the button to activate the drip” “without hesitation,” while everyone in the room stood “in awe.”

When she didn’t feel the drug immediately, Alex experienced a “momentary panic.”

“That is our contract: The woman who gave me the gift of life is now, in that final moment, asking me to give her the gift of death,” he wrote.

But then she smiled, he recalled, and said, “Ecco sta arrivando," or “Ah, here it comes.”

“With one last breath, surrounded by those who love her unto death, my mother, Giuliana Tela Schlempp, becomes enchanted,” he concluded.

At the end of his piece, Schlempp included a picture of his mother “as a diamond” –  after paying a company apply heat and pressure to her ashes to turn them into a jewel. 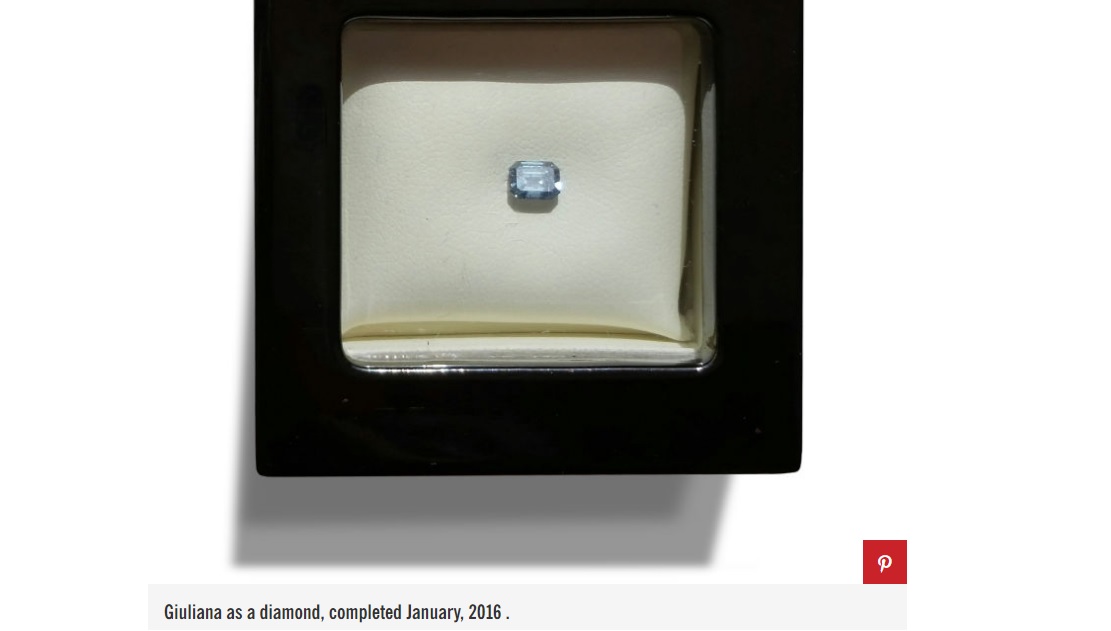 This isn’t the first time the media have pushed for assisted suicide and euthanasia.

In 2014, the media “applauded” Brittany Maynard’s “ethical” choice to die in California. Likewise, in 2015, a PBS documentary glamorized the “right-to-die” and NBC News deemed legal suicide “a death worth fighting for.”