The networks have their favorites when it comes to abortion gaffes.

During their morning and evening news shows, the three broadcast networks (ABC, CBS, NBC) haven’t spent one second on Hillary Clinton’s abortion comments in which she declared Sunday that an “unborn person doesn't have constitutional rights.” In comparison, when Donald Trump called for “punishment” for women who undergo abortions on March 30, the news shows spent more than 20 minutes on the story in the following 24 hours. 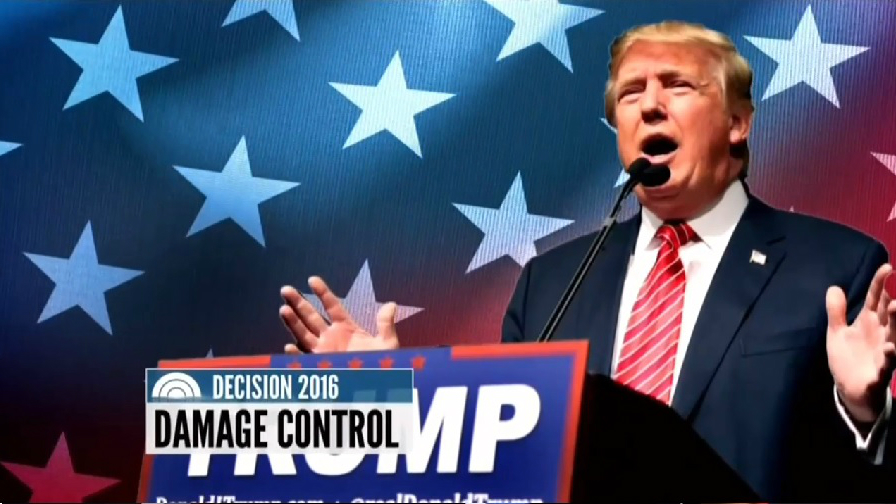 While the networks touted Trump’s remarks as a “gift” for Clinton, they kept quiet when she made her own. One Planned Parenthood employee made a fuss over Clinton “further stigmatiz[ing] abortion” while a pro-life conservative columnist called the her statements “incoherent and evil.” But the outrage on both sides wasn’t enough to coax ABC, CBS and NBC.

Even into this week, the networks continued stories on Trump’s remarks, but not Clinton’s. They weren’t alone – the Spanish-language networks followed the same pattern.

As of Tuesday morning, ABC, CBS and NBC have yet to say one word regarding Clinton’s recent abortion remarks during their morning and evening news shows.

Clinton’s comments came Sunday morning, during NBC’s Meet the Press, when she announced to host Chuck Todd that the “unborn person” had no constitutional rights:

CHUCK TODD: When, or if, does an unborn child have constitutional rights?

HILLARY CLINTON: Well, under our laws, currently, that is not something that exists. The – the – the unborn person doesn't have constitutional rights. Now, that doesn't mean that we don't do everything we possibly can, in the vast majority of instances to, you know, help a mother who is carrying a child and wants to make sure that child will be healthy, to have appropriate medical support. It doesn't mean that you don't do everything possible to try to fulfill your obligations. But it – it does not include sacrificing the woman's right to make decisions. And I think that's a – an important distinction, that under Roe v. Wade we've had enshrined under our Constitution.

Despite the networks’ silence, Clinton’s word-choice angered both the pro-life movement and abortion supporters, according to news outlets like the New York Times and the Washington Times.

Both stories cited a tweet by Diana Arellano, manager of community engagement for Planned Parenthood Illinois Action. Arellano attacked Clinton on Twitter for using the word “child” and “stigmatiz[ing] abortion.”

Hillary's statement that unborn people have no rights demonstrates just how incoherent and evil the left's abortion position is.

It's paradoxical for @HillaryClinton to call babies in the womb "unborn persons," but condone killing and denying them human rights.

In addition, the specific term ‘person’ is a legal concept that includes rights and statuses that the law protects, including protection of a person’s life under the laws against homicide. Pro-choice intellectuals have long said that even if an unborn child is a ‘life,’ it is not yet a ‘person.’

Guidelines issued by the International Planned Parenthood Federation discourage pro-choice advocates from using terms such as ‘abort a child,’ instead recommending “more accurate/appropriate” alternatives such as ‘end a pregnancy’ or ‘have an abortion.’

The networks themselves refuse to say “baby” in regards to abortion and opt for “fetus.”

Although her own abortion comments never made the broadcast news shows, Clinton appeared on the networks to condemn Trump for his abortion statements made less than a week earlier.

Trump’s gaffe came during a pre-taped MSNBC town hall with host Chris Matthews that aired March 30. After Matthews repeatedly pressed Trump on if and how he would penalize abortion if outlawed, Trump said there should be “some form of punishment” for women who undergo abortions:

CHRIS MATTHEWS: Do you believe in punishment for abortion, yes or no, as a principle?

DONALD TRUMP: The answer is that there has to be some form of punishment.

MATTHEWS: For the woman?

TRUMP: Yeah. There has to be some form.

Before and since the town hall aired, Trump released statements and made comments trying to clarify his abortion position to the point of flip-flopping. (Full comments located in reference section below.)

Unlike Clinton, the networks talked endlessly about Trump’s blunder. In fact, they deemed Trump’s abortion comments a “gift” for Clinton.

During ABC’s Good Morning America on March 31, World News Tonight anchor David Muir, a fill-in co-host for the day, asked, “Was this a gift for the Clinton camp?” Political analyst Matthew Dowd responded, “Oh, it was a gift wrapped with a bow and everything sparkles all over it. It was perfect for them.”

On Tuesday morning, two of the networks were still covering the story.

Also for ABC’s Good Morning America, correspondent Tom Llamas reported on a speech from Melania Trump “after a very rough week for Donald Trump where he stumbled on the issue of abortion and women's rights.”

But Trump shared some similarities with Clinton though, as he faced anger from both the pro-life movement and abortion supporters.

Kristan Hawkins, president of Students for Life, stressed that “No one in the pro-life movement wants to punish women who have abortions.”

“Women facing crisis pregnancies deserve compassion, love, understanding and tangible support, which is why pro-lifers are against abortion,” she said in a statement. “Not only does abortion end a human life, it’s the very opposite of empowerment, love, and compassion for women.”

“We have never advocated, in any context, for the punishment of women who undergo abortion,” she said in a statement. “But let us be clear: punishment is solely for the abortionist who profits off of the destruction of one life and the grave wounding of another.”

“Being pro-life means wanting what is best for the mother and the baby," added Jeanne Mancini, President of the March for Life Education and Defense Fund. "Women who choose abortion often do so in desperation and then deeply regret such a decision."

Planned Parenthood saw his comments as a fundraising opportunity. Dawn Laguens, Executive Vice President of Planned Parenthood Action Fund, called his position “outrageous” and wrote in an email to supporters on March 31:

Here's the awful truth: Women who have abortions are already punished. They're punished by protesters shouting at them as they walk into clinics. They're punished by laws that shut down health centers where they live, so they have to drive hundreds of miles to get constitutionally protected medical care. Some even risk arrest when they take the step of self-inducing abortions.

The Spanish Networks on Trump vs. Clinton

The Spanish-language networks followed a similar pattern to ABC, CBS and NBC on Trump and Clinton’s abortion gaffes, according to MRC Latino.

While Noticiero Univision did not make any mention of Trump’s abortion comments the evening of March 30th, Noticiero Telemundo (MSNBC sister network) featured his remarks as the very first story in its broadcast (with 2 minutes, 12 seconds).

The next morning on March 31, Despierta America (Univision) mentioned his abortion comments twice (lasting a combined total of 56 seconds). Un Nuevo Dia (Telemundo) spent more time than that on the story: 2 minutes, 2 seconds.

On Sunday evening and Monday morning, the news shows made no mention of Clinton’s abortion remarks. They focused instead on Trump’s bad week last week (touching on his abortion comments), the Wisconsin primary and the recent Panama Papers leak.

First statement by Trump on his abortion “punishment” comments:

"This issue is unclear and should be put back into the states for determination. Like Ronald Reagan, I am pro-life with exceptions, which I have outlined numerous times."

"If Congress were to pass legislation making abortion illegal and the federal courts upheld this legislation, or any state were permitted to ban abortion under state and federal law, the doctor or any other person performing this illegal act upon a woman would be held legally responsible, not the woman. The woman is a victim in this case as is the life in her womb. My position has not changed – like Ronald Reagan, I am pro-life with exceptions."

"And I just want to say, a question was asked to me. And it was asked in a very hypothetical, and it was said ‘illegal,’ ‘illegal.’ I've been told by some people that was a older line [sic] answer and that was an answer that was given on a, you know, basis of an older line from years ago, a very -- on very conservative basis."

Trump responding to Dickerson about banning abortion at some point in pregnancy:

"At this moment, the laws are set. And I think we have to leave it that way.​"

"Pastor Jeffers, who’s a fantastic guy who’s been on your show, a great man. And he said – he said – well, he said, but, as a hypothetical question that was a hypothetical answer. That was not a wrong answer. And there were other people that wrote me letters and – I mean, by the hundreds – saying that was a great answer to that question, the way it was phrased."