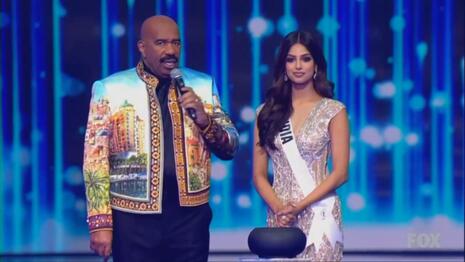 A new Miss Universe has been crowned and she is a climate alarmist. Ironically, the winner is Harnaaz Sandhu who represents India, one of the worst polluters on the planet.

On December 12, the 70th Miss Universe contest aired on Fox. The host, comedian Steve Harvey, instructed the contestants to draw a name from a bowl. The name of one of the celebrity judges was on the slip of paper. That judge then asked a question to the contestant. During the question-and-answer segment with the five finalists, Miss India was asked how she would convince people who think global warming is a hoax.

Rina: Many people think climate change is a hoax. What will you do to convince them otherwise?

Miss India: Honestly, my heart breaks to see how nature is going through a lot of problems and it’s all due to our irresponsible behavior. And I totally feel that this is the time to take actions and talk less because each action could either kill or save nature, prevent and protect is better than repent and repair. And this is what I’m trying to convince you guys today.

Miss India sounds like lots of progressives in the United States. The hyperbole on the urgency to "act now, the time for talk is over," is the kind of thing we hear from those in support of the Green New Deal. You’ll notice that in her answer, Miss India didn’t mention any ideas, only emotion (her heart breaks) and that it’s time to stop talking about taking action.

Perhaps she should talk about what she does to ease what she perceives to be the effects of climate change. Will she be using commercial flights to travel around the world instead of private jets?

We wish her well on her year’s reign as Miss Universe.

This little bit of climate alarmism was brought to you by J.C. Penney, Olay, and Wendy's. Conservatives fight back. Let the advertisers know what you think about that.