Ho Ho No! Netflix Tween Cartoon Grosses Out with Full-Frontal of Naked Santa 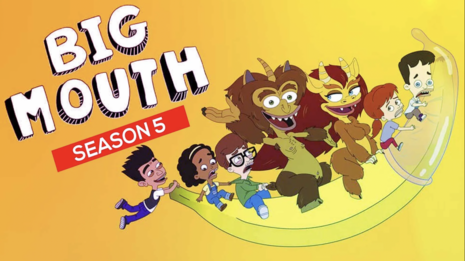 The special “A Very Big Mouth Christmas” episode begins with "Hormone Monster" Maury saying that the show will deliver what no other Christmas special will – the viewers will see "Santa’s dick." And, true to his word, that is what happens. In one scene, two elves (400-year-old virgins) walk in on Santa and Mrs. Claus having sex. When Santa realizes the elves are there, he turns to face them and his naked penis is exposed. Lovely.

In Episode two, “The Shame Lizard Rises”, there is plenty of body-shaming during co-ed swim class. During class, Lola (voice of Nick Kroll) announces that Jay (voice of Jason Mantzoukas) is uncircumcised. He’s the only one so the others are fascinated by this information. Matthew (voice of Andrew Rannells) is a gay character and he is very interested in seeing Jay’s erect penis. Jay ends up showing him and Matthew is aroused. Jay isn’t gay but, of course, since this is Netflix, Jay ends up choosing Matthew over his on-again, off-again girlfriend Lola by the end of the series.

Two new "Love Bug" imaginary characters show up, one for Jessi and one for Nick. They counsel the two about the subject of love. We think that Jessi and Nick will become more than just friends, as Nick confesses to Jessi that he loves her, with the encouragement of his Love Bug, but there is a conflict. Jessi feels love for her friend Ali (voice of Ali Wong), but when her Hormone Monstress Connie talks about lesbian sex, Jessi stops her and says she likes boys. For once, the platonic love between same sex best friends isn't further confused and contorted into the LGBTQIA box.