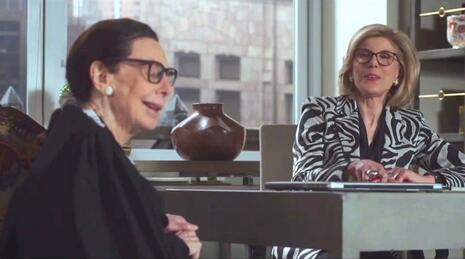 Last week’s episode included lawyer Diane Lockhart (Christine Baranski) hallucinating conversations with RBG (Elaine May) on both work and marriage issues. In the episode released August 12, titled “And the détente had an end…”, RBG is back to help Diane find another black lawyer who could be a partner. Diane is still under pressure to resign because she is a white name partner in a black law firm. Ginsburg suggests a former law clerk of hers and also of Justice Antonin Scalia’s named Allegra Durado (Wanda Sykes). Diane knows of her through EMILY’s List, the PAC that supports only pro-abortion women candidates running for office.

As the two speak, they admit they were “too hard” on Mitt Romney when he ran for president in 2012, which is random. Feminists mocked Romney when he said he hired many qualified women and said he had “binders of women” to choose from. Liberals created the trope that he was a part of Republicans’ war on women. Ironically, now this black Chicago law firm is conducting its own war on a woman, simply because of her skin color. Diane ends the conversation telling her idol, "God, I miss you."

Diane: This is stupid. What am I doing?

Ginsburg: What are you looking for?

Diane: A good lawyer. Someone Black. Partner material. Someone who's friendly with me but not so friendly that Liz rejects him. Or her.

Diane: It doesn't matter. Either one. I was always defense, but Liz came from the U.S. Attorney's Office.

Diane: Mm. But someone who wants to work here. And it-it needs to be a name.

Ginsburg: Go for a woman. Romney's binders of women.

Diane: We were too hard on him, weren't we?

Ginsburg: Yes, we were.

Diane: God, the latest partisan fight always takes precedent. But not with you. You were friends with Scalia forever.

Ginsburg: Yes. I liked him.

Diane: So is that who I want, someone I disagree with on most things but whom I like?

Ginsburg: That's something that only you would know.

Diane: But I need someone who Liz will think that I don't want, so then she will want her.

Ginsburg: You know who I'm thinking of?

Diane: I do. Because that's why I thought of you. She was your law clerk, wasn't she?

Ginsburg: How do you know her?

Diane: EMILY's List. I saw her at events. I knew her well enough to say hello.

Diane: What is she doing now?

Ginsburg:  I don't know. She left me to write a book. Some enormous tome on truth.

Diane: Is she still mentally... acute? I heard she had a meltdown.

Ginsburg: Oh, really? I... I believe that's hearsay promulgated by her ex-husband. He has since been committed. Why don't you call her?

Allegra is a straight shooter who says she doesn’t make decisions based on her political opinions, which, she said, is why she clerked for both Ginsburg and for Scalia. The other name partner, Liz (Audra McDonald), is concerned that since Diane recruited her, Allegra will side with Diane against her on conflicts that arise.

Allegra hasn’t been officially offered the job yet but it’s clear she will be. She checks the most important identity box for the firm – she’s black. We’ll see what happens next week. Will Diane’s hero RBG continue to make appearances to help with major decisions? Stay tuned.