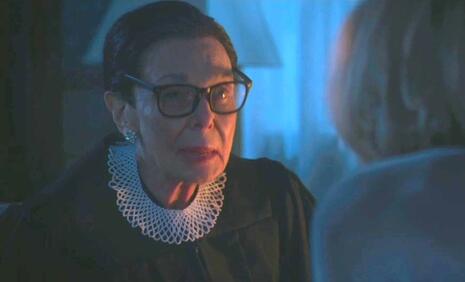 It’s not easy being Diane Lockhart in Season Five of Paramount+’s (formerly CBS All-Access) The Good Fight. The liberal feminist lawyer, a name partner in a well-established black Chicago law firm, is conflicted because of major attacks of white liberal guilt. She is struggling with two questions – should she step aside as a white name partner of a historically black law firm and can her marriage to a conservative Trump supporter survive?

Fortunately for Diane (Christine Baranski), she is able to hallucinate the presence of her all-time feminist hero, Supreme Court Justice Ruth Bader Ginsburg (Elaine May), during the episode titled "And the two partners had a fight..." released on July 29. In the middle of the night, on two occasions, Diane and RBG have a little girl talk about Diane’s concerns.

Diane asks Ginsburg during their first conversation if she should step aside and create the path for a black lawyer at the firm to rise to the top. It has become awkward for Diane to be a public face for the law firm and the younger woke associates are calling for her to step aside.

RBG tells her to hold her ground, stand up for herself and fight the patriarchy, or something. Never mind that the other name partner is female, too. She, however, is black and the daughter of a founding member of the law firm.

Diane: Well? What do you think?

Ginsburg: About your work?

Ginsburg: Yes. I think you know what I think.

Ginsburg: I think you're brilliant. I think any law firm would be insane to let you go.

Diane: That's not you. That's you telling me what I want to hear.

Ginsburg:  You want to know what I really think?

Diane:  Even though I'm being asked to step aside so that a Black person can take my place?

Ginsburg: Can you still do something for women?

As usual, the dialogue works in the obstacles faced by Ruth Bader Ginsburg as she climbed to the top of her profession. The hero worship of the "Notorious RBG" from the left will never end.

The second conversation between the two women is about Diane’s marriage to Kurt (Gary Cole). The two have completely different political philosophies and Diane finds herself questioning if she should remain in the marriage. She finds herself having to defend him to her black co-workers who refer to him as a white supremacist because of his alleged involvement in the Capitol Hill riot on January 6, 2021. Kurt was exonerated during an FBI investigation into that claim. Adding to Diane’s stress is the fact that Kurt is going to be offered a job with the dreaded NRA.

Diane: It's different for me than it was for you.

Ginsburg: What do you mean?

Diane: When you fought, you fought against white males, the dominant culture. But for me, I would be up against another dominated culture. Black lawyers. So what do I do?

Diane: If you knew that Obama was going to nominate a Black justice to replace you, would you have stepped aside?

Ginsburg: Well, I know what I can do, but I-I don't know what my replacement would do if he got nominated. I... What you know is always better than what might happen.

Diane:  Mm. What about Kurt?

Ginsburg:  What-what about him?

Diane: We don't agree about anything.

Ginsburg: Well, I didn't agree on anything with Scalia, but I-I liked him.

Diane: Yeah. Why did you like him? The opera?

Ginsburg: He made me laugh.

Diane: And you just wouldn't talk about the political stuff?

Ginsburg: Well, he teased me and I teased him. You know, life is too short to fight over everything. And, you're, you're, you're right about opera. Opera is good. Food is good. And his pasta was amazing. His spaghetti carbonara. Oh, my lord. You can't hate a man like that.

Diane: My husband is going to work for the NRA.

Ginsburg: You ever read Scalia's 2000 dissent on Stenberg v. Carhart? Working for the NRA is child's play. You know, you like who you like. I don't like bland people. And a lot of the people who agree with me politically are bland.

So, the episode ends with the assumption that Diane will stay in her marriage. It’s interesting, though, that even many fictional liberals can’t fathom relationships with those with whom they do not agree politically. At least they stayed true to Ginsburg's love and respect for Scalia.

Stay tuned to find out if Kurt goes to work for the NRA and how Diane - and this liberal show - handles that.