Colbert’s Cartoon Trashes Trump: Doesn’t ‘Give a S*** About Anyone Not Named Trump!’ 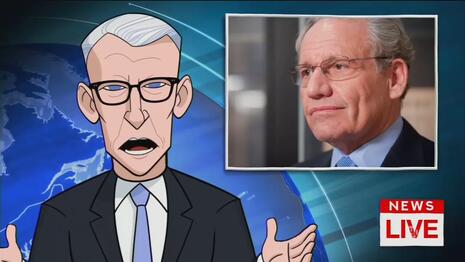 The second half of season three of Showtime’s Our Cartoon President began airing on September 13. The episode titled “Coronavirus” was more of the same from the Stephen Colbert created animated political series.

As the title of the episode indicates, the focus was on trashing President Trump over his handling of the coronavirus, thanks to the newly released book by Bob Woodward. CNN’s Anderson Cooper runs quotes from the book and plays audio clips to do the bidding of Trump’s opponents. This leads into a Trump rally where, according to CNN, Trump is trying to “defend” himself.

Anderson Cooper: Trump hit the campaign trail to defend himself.

President Trump: It’s so nice to be here in the one part of America that's not on fire. Everything's going great, folks! Don't believe anything you see, hear, or feel deep inside. Forget about these Michael Cohen and Bob Woodward books. I'll give you the cliffnotes. I wanted to be president again more than I wanted to stop this deadly pandemic. Wow. You people will cheer for anything! Get this -- I knew how bad coronavirus would be and then lied about it 'cause I don't give a shit about anyone not named Trump!

Joe Biden: Geez. I probably won't be voting for that guy.

Trump: Anyway, I was gonna kick this off with my law-and-order spiel, but for some reason, people aren't buying my message of "I alone can clean up the shit I took on your deck." But mark my words. If Biden wins, I will not be here to stop the chaos I am constantly creating!
I have to admit, hearing you cheer is the weirdest part of all this. None of you people have masks. And I thought the troops died for nothing.

Dr. Fauci: I mean, is it worth saving everyone?

Trump:  I didn't say soldiers were bad. I just said they were losers. I love the troops. That's why I dodged the draft -- to give the troops more space to shiver in foxholes!

Kellyanne Conway: I'm so glad I don't have to go on Tapper tomorrow and mop up this shit geyser.

Trump:  I'm using your tax dollars to defend myself against rape accusations. Do we love it?! We love it!

The media elites often remark that Trump supporters act cultish and this rally shows Trump acknowledging that his supporters will cheer for anything he says.

Sometimes Colbert and the other writers mock Democrats, too. This episode does so by admitting that the legend of Joe Biden is a hollow one. In order to try to spark enthusiasm for his candidacy, Barack Obama gives Biden some advice – he has to get out of the basement. It’s the same advice Jill Biden gives her husband. She is portrayed as a long-suffering political wife going through her husband’s third presidential campaign. Obama holds a rally at the Lincoln Memorial but keeps Biden hidden in a sewer drain.

Obama: Right now some folks are declaring a premature victory over this crisis, but that's not what leadership looks like. Joe Biden faces challenges head on. And he also knows the power of leading inaudibly from behind. Isn't that right, Joe?

Biden: We need a president with his heart in the fight and his shoes in your piss water!
Obama Vote Joe! Say it, or say goodbye to next summer's Aspen Ideas Festival.

Pete Buttigieg and Amy Klobuchar:  Vote Joe! Or I'll staple your ass to your knee caps!

The episode also includes President Trump launching an attack in Afghanistan in order to distract Americans from the virus. And Trump holds a staged fight against the coronavirus, complete with him dressing as a Viking.

We can expect this kind of over-the-top writing from this show all the way to November 3. Trump will continue to be blamed for “hundreds of thousands of deaths” as Obama said in this episode and the president will be portrayed as a selfish, corrupt man. Nothing changed during his show’s hiatus.