70th Emmy Awards: ‘Only White People That Thank Jesus Are Republicans and Ex-Crackheads’ 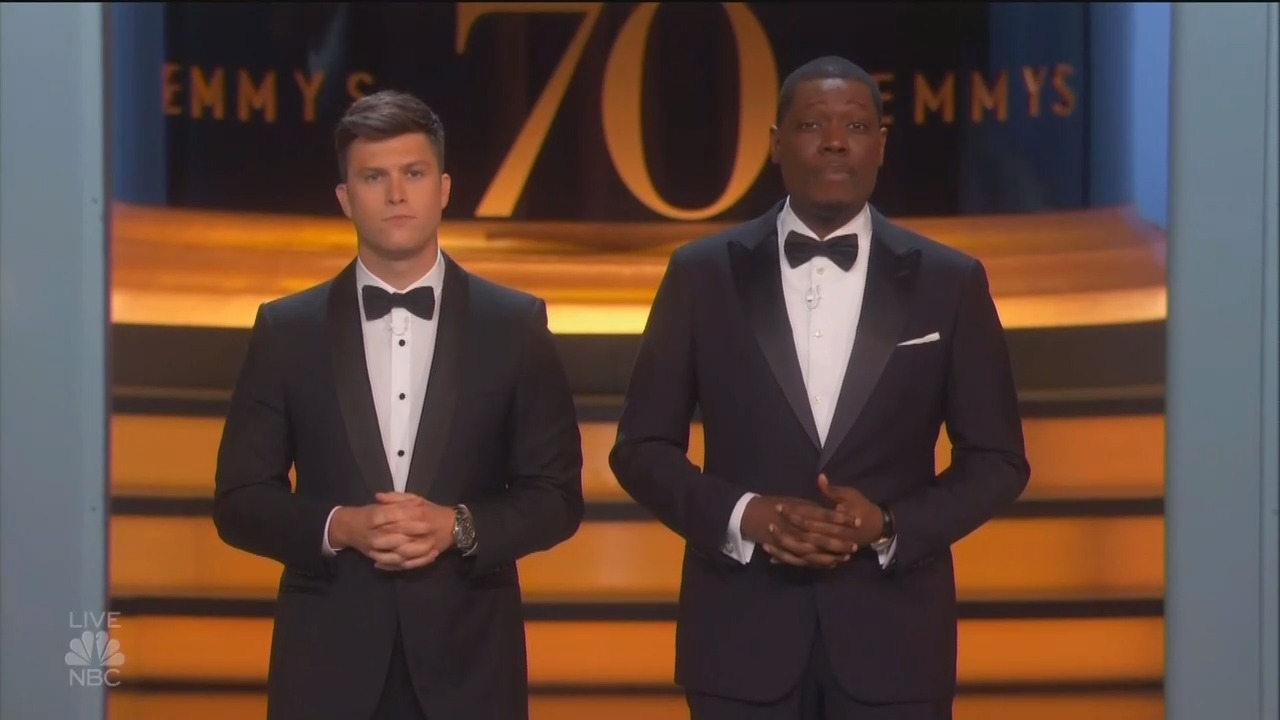 Michael Che said his mom would not be watching the broadcast because “She says she doesn't like watching white award shows because you guys don't thank Jesus enough… The only white people that thank Jesus are Republicans and ex-crackheads.”

Thanking Jesus became a running joke with some of the winners the rest of the night, but it remained true - no white person thanked God. Bi-racial Thandie Newton, who won Best Supporting Actress in a Drama Series for Westworld said, “I don’t even believe in God, but I’m going to thank her tonight.”

And, of Roseanne Barr’s canceled television show, the riff was about shows like Tim Allen’s Last Man Standing being canceled by one network then picked up by another that "Roseanne was canceled by herself, but picked up by white nationalists." Ugh.

Glenn Weiss won Outstanding Director for the Oscars. He surprised his girlfriend (and the audience) by proposing marriage to her. She came on stage and he produced a ring for her. It was very sweet.

Diversity was a major theme of the night. From the opening number which had actors singing "We've Solved It" spoofing Hollywood thinking they've solved all their racism and sexism problems with diversity, to the Chairman of the Television Academy coming out for a self-congratulatory speech, “We are more diverse, more inclusive, and more committed than ever to telling stories that represent all of us in 2018 - let's give ourselves a hand.”

Che also took the opportunity of Hollywood's drive for diversity to get some reparations. Saying, "As a black comedian for so many years," he's realized "our TV legends and heroes have gone unrecognized. So this year as host, I took it upon myself to finally right some of those wrongs. I present the Reparations Emmys."

As the deaths of people in the industry were recognized in memoriam, an odd inclusion was present - that of Senator John McCain, who was listed as "politician," no reference to his past cameos on television shows were made. This is not a category I've noticed in past years, one can't help but wonder if this was done as a subtle dig at President Trump. After all, it was only 10 years ago that all of Hollywood hated McCain when he ran for president against their beloved Obama.

And, toward the very end of the show, Ryan Murphy accepted the award for Outstanding Limited Series. His series was on the 1997 murder of fashion designer Gianni Versace. He used his speech to lobby for more hate crime legislation and called America "a country that lets hatred grow unfettered and unchecked." Really? There are currently laws on the books that deal with assault or murder, you know. And...Versace's killer, Andrew Cunanan, was gay and killed at least five people.

Ryan Murphy: "The Assassination of Gianni Versace" is about a lot of things. It's about homophobia, internalized and externalized. It's about a country that lets hatred grow unfettered and unchecked. One of out of every four LGBTQ people in this country will be the victim of a hate crime. We dedicate this award to them, to awareness, to stricter hate crime laws, and mostly this is for the memory of Jeff and David and Gianni and for all of those taken too soon. Thank you very much.

All in all, the show was rather vanilla compared to some of what Hollywood has been saying on Twitter recently. Perhaps I should just be grateful that that vitriol didn't carry over into tonight. Let's hope future award shows are filled with people patting themselves on the backs and just thanking others who have helped them receive the recognition instead of further political attacks.