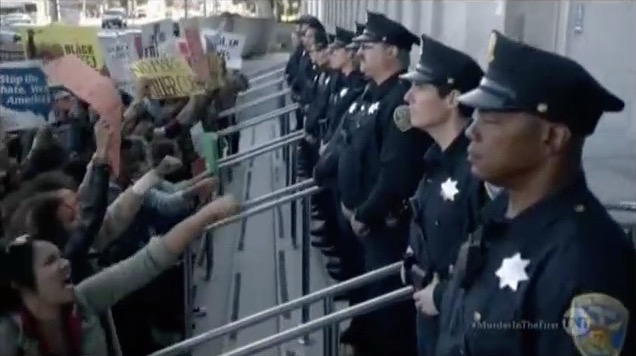 After a brutal evening in Dallas, Texas, where five law enforcement officers were murdered while protecting a Black Lives Matters protest, TNT’s Murder in the First delivered a poignant reminder that all lives matter. In the episode “Black and Blue,” Inspector Terry English (Taye Diggs), a black cop with ten years service with the San Francisco Police Department (and a Gulf War veteran) is facing growing pressure from the public to come forward after being involved in a shooting, though neither his identity or his race have been given to the public.

In last week’s episode, Inspector English was in pursuit of a suspected murderer. As he chased the armed suspect into a dead end alley, the suspect reached for his weapon. English drew his gun and shot the suspect several times. The suspect, as it turns out, had dropped his gun as he ran so a weapon was not found on him.

After the dead suspect’s gun is found near the scene of the crime by a child and turned in to the police, Inspector English is cleared of misconduct and reinstated to duty. The police chief wants to give a press conference with English so that the department can get out in front of the public’s reaction.

After a complimentary statement from the Chief, English begins a standard statement declaring it an honor to serve and protect the community and extending condolences to the dead suspect’s family. Then he goes off-script. He holds up his hands and says he is the same color as the suspect - “This isn’t about race.” He tells his story about how he saw a gun and that the suspect was “prepared to kill me.” Then he drops some honesty into the discussion – would the black community “have put together just as many vigils and protests” if he had been killed in the line of duty?

Chief: Inspector Terrance English has served the San Francisco Police Department with distinction for nearly a decade. And in that time, he's proven himself to be of excellent character and reputation. The Police Commission has determined that his actions were performed in the best interest of public safety. Therefore, he will be reinstated to duty effective immediately. Inspector English has asked to make a personal statement.

Inspector English: Thank you, sir. It is our job to protect and serve every member of our community. And I will continue to do so as long as I have the honor of wearing my star. I offer deep condolences to Mr. Jackson's family. Uh...

Inspector English: Oh, I'm not done yet. Look at me. Look at me. I'm the same color as Calvin Jackson. This isn't about race. That day, I had every reason to believe that I was chasing an armed murderer. I saw the gun. I saw him reaching for his gun. Now at the time, neither one of us knew he dropped it, but that day, Calvin Jackson was prepared to kill me. Now the gun was recovered, and Mr. Jackson's prints were on it, but... My question is this -- would the community have put together just as many vigils and protests for me if I had been killed in the line of duty? Now I'm done.

I think we all know the answer to that one.