In “Chapter Twenty-Seven” of CW’s Jane the Virgin, Jane’s Abuela (Ivonne Coll) files the paperwork to get her green card, after many decades, to stay legally in America. You may remember that it was revealed in a previous episode that Abuela is an illegal immigrant who never bothered to become a legal citizen. 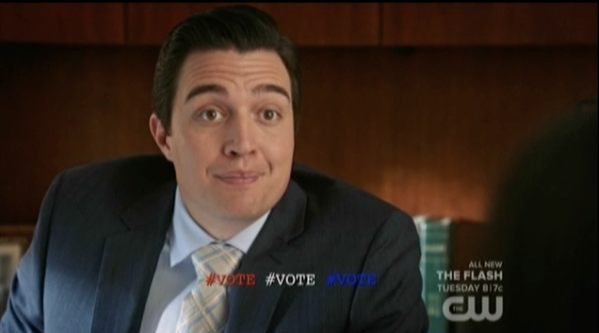 During the background checks of Abuela and Xio (Andrea Navedo), her sponsor, a felony conviction is discovered on Xio’s record. Seems Xio shoplifted some jewelry for her druggie boyfriend in the 1990’s and this conviction must be overturned for Abuela to get her green card.

While speaking with an immigration law attorney, the ever-changing immigration laws came into play. Not about to let the opportunity pass without reminding the audience to #VOTE, #VOTE, #VOTE for immigration reform, that hashtag was typed across the screen in patriotic red, white and blue. See, it’s your patriotic duty to help the illegal immigrants stay in America.

Xio: This is crazy! What felony?

Attorney: For grand theft, back in the '90s.

Xio: Oh, no, there must be a mistake. You mean the jewelry store?

Xio: No, this Isa mistake. It was a misdemeanor, shoplifting. Uh... A felon is, like, a murderer.

Attorney: Or, in the state of Florida, anyone who steals in excess of $400, which is what you pled guilty to.

Xio: It was this guy I was seeing-- Zed. We-we worked together at Slushie Palace. (Groans) He stole this ring that I liked. I took the fall for him, because he had a prior conviction. I was 18 and in love. I got community service-- I thought it went away.

Jane: Ok, so.. Is this gonna make it harder for my grandmother to get a green card?

Attorney: Possibly. It's hard to say for sure. Immigration laws are constantly changing. But... I know that your grandmother is cautious.

Jane: Okay, so what if we found this Zed guy and we had him come forward? Can we get it taken off of her record?

Attorney: Of course-- if you have the conviction overturned.

Latin lover narrator: At least, she hoped it was.

Meanwhile, we have a celebrity sighting. It’s Britney Spears, a former friend of Rogelio (Jaime Camil).  In 2009, Britney sought revenge towards Rogelio for a past transgression involving Rogelio calling the paparazzi for publicity as the two were in Mexico together shopping. Rogelio demands an apology from Britney, as she had the teleprompter operator change up Rogelio’s lines to make him look foolish during the Latin Pop Music Awards. As you would imagine, Britney isn’t having it.

Jane: Dad? What are you doing here?

Rogelio: I'm just simply sitting here catching up on the news and waiting for Britney Spears to emerge so that I can confront her.

Rogelio: Don't you pretend you don't know my name.

Britney: I'm so sorry. I hope I didn't hurt your feelings-- it's just that I meet so many people.

Rogelio: This is not about my name! It's about the 2009 Latin Pop Music Awards.

Britney: Wait, are you still mad about that teleprompter accident?

Rogelio: It wasn't an accident, it was premeditated, and you were the premeditator.

Britney: Like I told you at the time, I didn't have anything to do with that.

Rogelio: I saw you talking to the teleprompter guy before the show!

Britney: I like to get to know everyone on the crew.

Britney: But it doesn't make sense-- why would I do that? Can you think of any reason why I would do that?

Rogelio: Because I was emerging from your shadow, and you didn't like it.
Britney: Let's go! So long, Rogulio! Rogelio!

Rogelio: You know my name! Come back and admit what you did, Britney Spears! Admit it! Admit it!

In the end, sleazy Zed agrees to help Xio with her felony conviction so that Abuela can get her green card. It’s liberal Hollywood – you knew she would. They’ll guilt trip you into voting for amnesty, even if they have to use sweet elderly grandmas, er, abuelas.