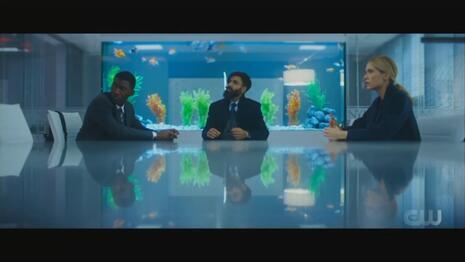 These days a thriller about a global financial conspiracy is practically guaranteed to be permeated by liberal, anti-capitalist attitudes. Devils on The CW is no exception.

Sofia works for Subterranea — a Wikileaks-style anarchist group that targets banks like NYL — seeking revenge for her brother’s death. Led by a former economist, Daniel Duval (Lars Mikkelsen), Subterranea gathers information about financial targets by hacking, stealing and other means and leaks the information to the press.

After having a private investigator inform him about Sofia’s past, Massimo asks another trader, Kalim, about the Banco de Rosa failure. Kalim asks him how he can’t remember buying up all of the banks “nonperforming assets” (such as loans in arrears) and making $500 million for NYL.

“Destroying all the borrowers,” Massimo says sadly as images of a young Sofia watching her brother’s suicide flash onscreen.

Just in case that wasn’t enough to hammer home the left-wing claims that financial trading is evil and kills poor people, the point was reinforced even more bluntly late in the episode in an exchange between Massimo and Duval.

Massimo comes home to find the Subterranea leader has broken in and is sitting in his living room. Duval tells him, they’re a lot alike and that he used to be an economist and consultant to “multinational corporations.”

He and those companies would find an “underdeveloped” country with a resource and persuade it to take out “huge development loans through the World Bank” and ultimately the contractors pocketed all of the money.

Duval: So basically, we took their money, and they were left with massive debts. And after that, I mean, taking their resources was like taking candy from children. I was a hitman, an economic hitman. I killed people. Without ever touching a gun.

Duval: Ah, but you do, Massimo. You do. People like Sofia's brother. You see, you're nothing but a pawn in a rigged game where the poor get poorer and the rich get super rich. This bubble is going to explode sooner than you think. And when it does, you'll want to be on the right side.

While certainly there may be bad actors, or actions taken in any industry including finance, Devils portrays the entire system as corrupt, “rigged” and repeats the old line about the poor getting poorer as the rich get richer.

It also leaves out any argument or evidence to the contrary. That may serve the purpose of its conspiratorial plot, but it doesn’t serve viewers who deserve to know that economic freedom and capitalism have helped lift hundreds of millions of people around the globe out of poverty in recent decades. Meanwhile in some countries, it's government corruption, lack of freedom and inadequate rule of law which inhibit economic growth and keep many in poverty.