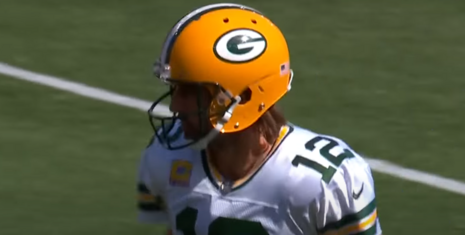 Green Bay Packers quarterback Aaron Rodgers has been called many things for deciding to not get vaccinated despite the NFL’s mandate last season. Thanks to Shannon Sharpe, we can now add “prick” to the list of pejoratives.

The co-host of Skip and Shannon: Undisputed went on air yesterday and promptly ripped Rodgers for his decision to be, as the quarterback put it, “immunized” against COVID-19.

The quarterback recently went on The Joe Rogan Experience podcast and detailed that he was allergic to an ingredient in the mRNA vaccine, Polyethylene glycol (PEG). As MRCTV’s Nick Kangadis pointed out, the Johnson & Johnson vaccine was discontinued because it was causing blood clots in those took it.

As such, Rodgers had to find another way to get treated against the virus, and presented the NFL with 500 pages of research to explain why he didn’t take the vaccine, his treatment process, and the effectiveness of that process (for which he was called a “conspiracy theorist” by the league).

None of that mattered to Sharpe when he decided to rip Rodgers on Thursday.

Shannon Sharpe calls Aaron Rodgers a “prick” and a “horrible person” because he didn’t get the vaccine.

It is none of Sharpe’s business what Rodgers chooses to do with his health decisions, and to degrade the gunslinger with strong language like that shows Sharpe is completely out of touch with reality.

Furthermore, there are plenty of people associated with the NFL that could be considered “aloof” and “horrible people” that actually are aloof and horrible people. Colin Kaepernick thinks the world revolves around him and his new social justice campaigns, Miami Dolphins wide receiver Tyreek Hill strangled his pregnant girlfriend, Cleveland Browns running back Kareem Hunt violently beat a woman in a hotel, and the list goes on.

But just because someone goes on air to explain why he didn’t take a vaccine that is as ineffective as the most politicians in office, Sharpe thinks he’s somehow the worst person ever.

That seems pretty aloof to me.