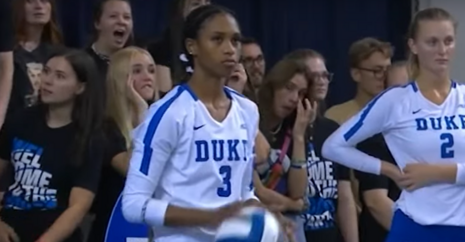 In a game between Duke and BYU’s women’s volleyball teams on Friday, 19-year-old Rachel Richardson, an outside hitter for the Blue Devils, claimed she was heckled by a fan and called a racial slur.

Richardson posted a Tweet on Sunday with her statement regarding the event, saying that “No athlete, regardless of their race should ever be subject to such hostile conditions.” She was also was classy enough to not throw the BYU team itself under the bus in her statement.

Naturally, this garnered much attention nation-wide, and Richardson was even interviewed by ESPN’s Holly Rowe.

However, Outkick has reported new information that suggests that this whole story might be a hoax.

Richardson claimed a fan who was not a student at BYU (but still sat in the student section) called her the N-word during the match on Friday. Richardson’s godmother, Lesa Pamplin (who is running for circuit court judge candidate in Fort Worth, TX), said she was called that word “every time she served.” For what it’s worth, Pamplin’s campaign relies heavily on advocating for racial reform.

Despite these accusations, BYU campus police and witnesses at the event are telling a different story.

After reviewing footage of the game and the people around where the incident took place, BYU Police Lt. George Besendorfer told the Salt Lake Tribune “When we watched the video, we did not observe that behavior from him (the unnamed student).”

Another police officer who reviewed the footage of the scene in question said “There was nothing seen on the game film that led me to believe” that the man “was the person who was making comments to the player who complained about being called the N-word.”

Furthermore, multiple students interviewed by The Cougar Chronicle, a school paper that operates independently from BYU, reported that they do not remember that word being said or anyone acting in a derogatory way towards Richardson.

“There is zero evidence of a slur being said. Not a single witness, besides Ms. Richardson, has come forth. Not a single cell phone video,” an anonymous source said who attended the volleyball game.

So for now, it looks like Richardson’s case is pretty insignificant, and yet ESPN and other left-leaning outlets have yet to comment on this half of the story because they are too busy hyping up Richardson as their next victim of racism. More details may emerge that prove Richardson right, but for now it seems like she made an error on how she served her story.