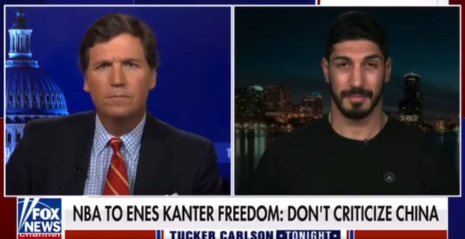 Tonight on @TuckerCarlson they played audio of top NBA executives — including an owner, a general counsel & the commissioner — saying they didn’t want to upset China by having pro human rights tennis shoes worn by Enes Kanter in games. pic.twitter.com/lsrpULc2NC

Now there isn’t a lot to like about anything that was said. The NBA is clearly deep in China’s grasp, which is not a good thing.

The league is doing billions in business with an adversary of the United States, a human rights violator, and a destabilizing force in the Pacific.

It also showed the NBA's rank hypocrisy. The league styles itself a strong social justice advocate for American issues, but it will ignore the problems within its major global partners and silence those who speak out against the injustices China commits (like Enes Kanter Freedom).

No matter what country the league chooses to do business with, that country will always have flaws. But it is especially discouraging to see the levels of corruption the NBA will go to stay on China’s good side.