The English women’s national soccer team is off to a phenomenal start in the group stage of the Women’s 2022 European Championships, winning its first two matches by a combined score of 9-0 and earning a bid to the quarterfinals of the tournament before their last group play matchup. 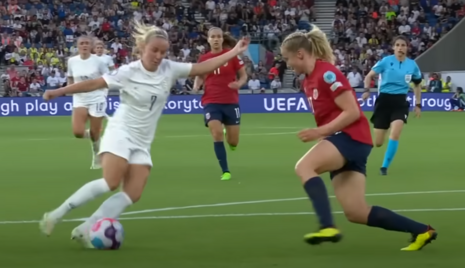 But despite all that success, there’s something deeply, deeply wrong with the English squad. It’s not a tactical approach to their game, it’s not a long list of injuries to star players, it’s not their upcoming schedule.

The Three Lionesses' most glaring issue is that there is too much “whiteness” on the team.

I'm sorry, what? There's a problem with the England women's team in the #WEUROS2022 being too "white"? Which players should be dropped because they have the wrong skin colour?

Just extraordinary that a BBC presenter can say this and still be in her job!
pic.twitter.com/PBpOC8tMhs

At least that’s what BBC news anchor Eilidh Barbour thinks. In a post-match recap after England defeated Norway 8-0, she took time in her broadcast to criticize the racial makeup of the team.

This absurd take caught the attention of Darren Grimes, a British news host who correctly called out the obvious race-baiting from Barbour.

The BBC are obsessed. What’s so wrong with the #Lionesses being white? Is the suggestion here that black players are being unfairly discriminated against? If so, does the BBC have any evidence for this claim? It’s the constant race baiting that baffles me. pic.twitter.com/ojXsaQTDV2

In situations we always have to ask, what is it about whiteness that is inherently evil? While you would expect people who so strongly scream and proclaim that whiteness is a bad thing to readily provide at least one reason for why white people are evil, we don’t even get a hint of a reason why.

Plus, England has three players with a minority background, while Norway only boasts one. So if Barbour were consistent in her analysis, she would have also criticized the personnel choices of the Norwegians too.

Then again, race-baiters are often anything but consistent.