Last night, the Toronto Blue Jays defeated the Boston Red Sox, 6-5, thanks to a walk-off single by first baseman Valdimir Guerrero Jr in the bottom of the ninth. The close loss itself was frustrating for Sox fans and media, but Boston sports reporters are furious at the outcome for another reason. 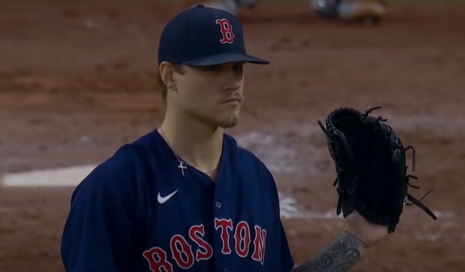 Pitcher Tanner Houck has earned the role of closer for the Red Sox in recent weeks, and currently has six saves on the season. But he was not available to close out the tight game for the Red Sox on Tuesday because he is unvaccinated, and Canada still has strict vaccination laws in place. Houck has not traveled with the team to Canada this year and cannot until he is vaccinated or Canada comes to its senses.

Houck has made his choice in the name of personal freedom -- something all Americans should do -- and is currently not violating any MLB regulations regarding the vaccine (the MLB required coaching personnel to be up to date with booster shots at the start of the season but did not require that for players). But even that wasn’t good enough for the infamously ruthless Boston sports media, who viciously tore apart Houck on Twitter for “forsaking his team” and ended up blaming the loss on him.

Most richly-deserved loss ever. Anti-vax Sox closer is back in Boston enjoying personal freedom, while Sox pen blows 5-4 lead in the 9th. Pen never got an out in the ninth. Sox are 2-7 vs. Jays, 7-16 vs. AL East. But everybody evidently ok with Tanner Houck quitting on team.

Tanner Houck will do absolutely anything to help the Red Sox win, except make sure he's actually with the team and available when they really need him to close out a one-run game in Toronto

Counting that as a blown save for Dr. Houck.

None of that could be further from the truth.

Back in April, Houck said that he didn’t get the vaccine because he thinks “it's a personal choice for everyone whether they get it or not.” He’s been available for his team since then and isn’t disloyal to them because he decided to not get the jab, and he further seems to be the only consistent closer the Red Sox currently have.

It is also absurd to blame the loss on Houck. The Red Sox have a myriad of other capable options in their bullpen that could have preserved their lead heading into the last half inning of the game. Even Red Sox manager Alex Cora reiterated that blame should not have been laid on Houck’s shoulders.

So the media can blame Houck all they want and try to make him feel guilty for his decision, but it’s not his fault and he should be respected for how he is carrying himself. The Red Sox will simply have to find a way to win without him in Toronto.