While plenty of athletes in today’s world have taken up part (or full) time jobs as social justice warriors, one athlete is forgoing his job making millions in the NFL to pursue a life dedicated to making eternal change. 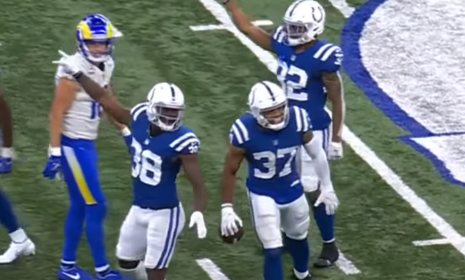 Indianapolis Colts starting safety Khari Willis announced on Wednesday via Instagram that he will retire from playing football in order to become a pastor full-time.

In his announcement, Willis thanked his coaches, teammates, and others within the Colts organization for impacting him during his career, but stated that he would be using his Sundays for doing different things moving forward.

"With much prayer and deliberation, I have elected to officially retire from the NFL as I endeavor to devote the remainder of my life to the further advancement of the Gospel of Jesus Christ,” Willis said.

The 26-year-old was a fourth-round pick in 2019, and will finish his career with 219 tackles and four interceptions. He also started 33 of 39 games he played in during his career.

Colts head coach Frank Reich was incredibly supportive of Willis’ decision and wished him the best.

"We're thankful and appreciative of Khari's contributions to the Colts both on and off the field over the last three seasons," coach Frank Reich said. "Khari's character, leadership, and professionalism will be missed in our locker room as will his play on Sundays. I admire and respect his decision to transition into the next stage of his life and ministry and my prayers will always be with him."