Eileen Gu is a freestyle skier that, despite being an American citizen, chose to represent China in the 2022 Winter Olympics. That decision received a lot of criticism (since China is by no means a shining beacon of human rights), but Gu is now oddly being a strong advocate for the U.S. to win the bid to host the 2030 or 2034 games in Salt Lake City. 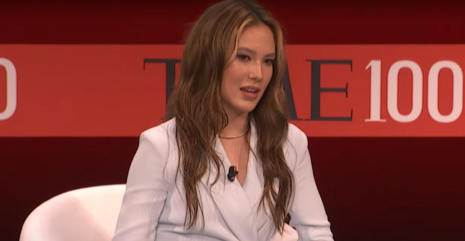 Citing a desire to promote globalism, Gu spoke at the TIME 100 Summit and gave her reasoning for why she wants the U.S. to host a future edition of the Games.

“I think that’s this beautiful example of globalism and of the capacity that we can use skiing and we can use sport and we can use winter sport to connect people,” she said. “Salt Lake specifically wants to become a global destination for athletes everywhere to come train there and they want to incorporate 15 new countries into the Winter Olympics. I think that’s something that’s really beautiful and I’ve always stood for that and so I’m really honored to be a part of the whole thing.”

Her full interview with TIME senior senior sports correspondent Sean Gregory is below.

Despite her desire to be a bridge for unity, a large contingent of people in China have ridiculed Gu for her decisions. According to Bloomberg, a number of users on Weibo (China’s version of Twitter) have criticized Gu for using her platform to make millions in endorsements (she’s made over $40 million) while not being able to choose a side on which country to support.

Again, unity is a good thing. But when it appears that you have no idea why you are pursuing unity and your motives seem to be all over the place, the cause you are pursuing starts to become unclear.

While she certainly is within her right to choose whatever country she wants to represent -- even though China doesn't allow dual citizenship and there is no record of her dropping her U.S. citizenship -- her constantly playing both sides of the aisle is starting to seem a bit fishy.