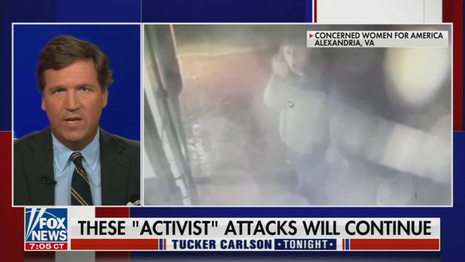 The Concerned Women for America (CWA) office in Washington, D.C. was vandalized on Saturday by a man who reportedly has a history of taunting CWA staff.

In a video that first aired on Tucker Carlson Tonight, this man (who remains unidentified) ripped the intercom system from the front entrance, made obscene gestures at the security camera and then proceeded to urinate on the door and windows.

"This has been an ongoing issue, but unfortunately, it's escalated," CWA CEO and President Penny Nance said. "This is an activist who has made it very clear that he doesn't like our position on the issue of life and other issues, including the idea that biological women matter. For the last few weeks, he has harassed our staff, he's thrown things at our building, and he's thrown things on cars inside our secure parking area. But it escalated this weekend."

The man’s actions come in the wake of the leaked Supreme Court document that hints that the federal protections afforded by Roe v. Wade could be removed.

Despite the predictable actions from an abortion sympathizer, Nance said that she and her organization would not back down from its staunch position on the right to life.

"The bottom line is that it does not matter what he or anyone else says. Never back down from defending life,” Nance said. "We're not vile, we're not hostile. We're joyful, smiling, happy warriors and we will continue to fight on the side of righteousness and on the side of life.”

In a statement provided to Fox News Digital, Virginia Attorney General Jason Miyares (R) condemned the incident when he was informed by CWA of what happened.

"It’s never acceptable to resort to intimidation, destruction, or violence in our political discourse," Miyares said. "We should embrace diversity of opinion, civil dialogue, and debate, because it is essential to making America a unique and free country."