PA Elementary School To Vote On After School 'Satan Club'

Most schools offer things like sports teams, book clubs, or music lessons for kids after school. But one school in Pennsylvania is considering offering an extracurricular activity that is literally demonic. 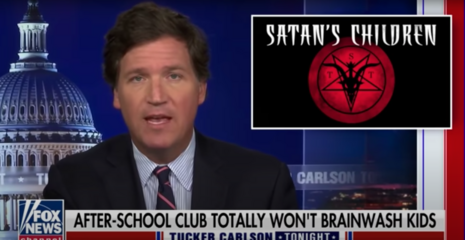 The Northern Elementary School board in York, PA will hold a probationary vote to allow an After School Satan Club in the school, continuing a disturbing trend by self-proclaimed Satanists to weasel their way into elementary and grad schools. This particular club was pushed by a parent who was upset that the school allowed a Bible study in the school during operating hours (oh, the horror!).

Sponsored by the Satanic Temple, the club would offer "activities such as science and crafts projects, puzzles and games and (students) would learn about benevolence, empathy, critical thinking, problem-solving and creative expression." The organization at large is making a concerted effort to establish chapters in response to the Christian Good News Clubs that are currently in many schools across the country.

While benevolence, empathy, etc. , sound nice, no organization that supports abortion and opposes the good morals taught in the Bible should be teaching any of those things.

Furthermore, the fact that an organization that named itself after the father of all evil wants to teach young children these things is more unsettling than the transgender ideology that is infiltrating our schools.

Lucien Greaves, the spokesperson for the Satanic Temple, went on Fox News and tried to rationalize what the club will do. Unfortunately for Greaves, he tried to explain this to Tucker Carlson, who has a knack for calling inconsistencies and lies when he sees them.

Organizations like this do not belong in schools, and children should not be trusted to men like Greaves. There is no middle ground and there should be no compromise.