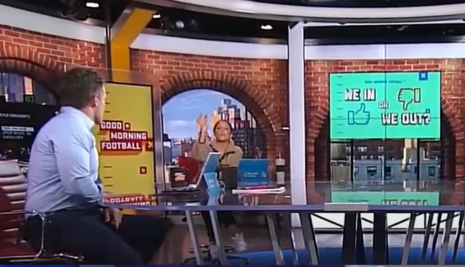 On the Tuesday morning edition of the NFL Network’s Good Morning Football, a group of four analysts discussed the impact that Los Angeles Rams wide receiver Cooper Kupp had on his team’s season, which culminated in a 23-20 victory over the Cincinnati Bengals in Super Bowl LVI (Kupp earned game MVP honors). However, the discussion went south just seconds after host Kyle Brandt began to share his thoughts.

Brandt attempted to passionately highlight the impact of Kupp’s season, but the first words out of his mouth after his attempt to interject were, “F--- it.” There was no audio cut out to save him, so the entire TV audience heard it. Everyone at the table immediately stared confused at one another, and Brandt walked a lap around the studio as his self-inflicted punishment.

While it would be nice to label this example of poor language etiquette as a one-time thing, it, unfortunately, is far from the first time something like this has happened in the NFL within the past year.

On ESPN’s Manning Cast, a show hosted by former NFL quarterbacks Peyton and Eli Manning that would provide commentary on each Monday night football game, the hosts frequently invited guests on the show that would frequently swear on national TV. Former Seattle Seahawks running back Marshawn Lynch dropped several f-bombs and said “s—t” several times during a game between the New Orleans Saints and the Seahawks, and Eli flipped a double-bird on camera during a New York Giants and Philadelphia Eagles game.

But it does not stop there. In addition to all the political undertones that are unfortunately a part of the NFL entertainment experience, the league seems perfectly content with sexualizing their Super Bowl halftime performances. During the most recent halftime show, rapper 50 Cent made his entrance by singing amongst a group of club dancers who made no effort to dress or dance modestly. Just two years ago during the Super Bowl LIV, Shakira and Jennifer Lopez pole-danced and flaunted their bodies in a way that would make most people blush with embarrassment.

Those within the NFL entrusted to entertain us should strive to speak and act better than this, especially when people of all ages watch their productions. If they refuse to or do not slowly trend up over time, we should no longer give them our time, money, or attention.