LeBron Tests Positive For COVID, Despite Being Fully Vaccinated

The Left has championed the COVID-19 vaccine as the magical potion by which we can all be saved from ever having to deal with the effects of the virus again. However, LeBron James showed us on Wednesday that is not entirely true. 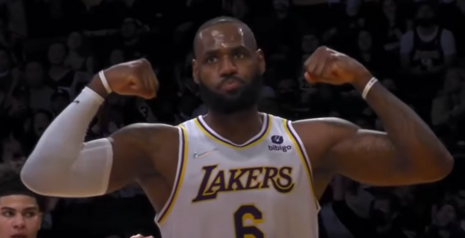 The Los Angeles Lakers forward tested positive for the virus (despite being asymptomatic) and will enter the NBA’s health and safety protocols for at least 10 days. He will have to provide two consecutive negative COVID tests before he can return to the lineup for a slumping Lakers squad.

Despite being a public figure who has a knack for saying things he shouldn’t (i.e. criticizing Kyle Rittenhouse for crying during his trial) and for being silent on China’s forced labor camps, it is sad to see that athletes like James are still put through unnecessary precautions to protect against the virus. Men in their peak physical prime should not have to wait 10 days to get back to work just so others can feel safe. No one would blame Michael Jordan – who played one of the best games of his career with the flu – for being disgusted with how soft the league has become.

It is also ironic that a vaccinated player is the one who contracted the virus. Yes, it continues to prove the point that jabbing yourself does not automatically guarantee that you’ll be safe from ever getting COVID again (which is what people with a shred of common sense have been saying all along).

But it also would be nice if the vaccine worked as advertised. If you believe that taking the vaccine is the most logical way to protect yourself against the virus, by all means, take it. This is why James said he chose to get vaccinated before the season started:

“I know I was very skeptical about it all, but after doing my research and things of that nature I felt like it was best suited for not only me, but for my family and my friends,” James said in September.

Therefore, it would be reasonable to believe that James would not have to endure being sick with COVID. But unfortunately, the government has done a tremendously horrendous job communicating what the vaccine can and can't do.