Boston Red Sox centerfielder Kiké Hernández has been a hitting machine in the 2021 MLB playoffs thus far, batting .422 with five home runs, nine RBIs, and 19 hits, uncanny numbers through just 10 games of the postseason. This has been his best one of the best October runs in history, but members of the gay community said they saw this outburst coming – based on his dancing abilities and willingness to embrace a more effeminate image of a man (yes, you read that right). 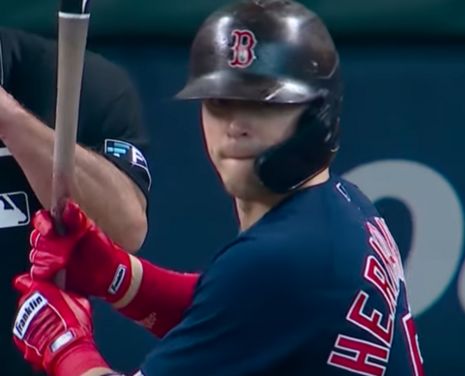 While with the Los Angeles Dodgers in 2019, Hernández posted a video of himself picking up a bat in batting practice and simultaneously doing the “Bend and Snap,” a flirtatious dance move made popular in the movie “Legally Blonde.”

At the time, the gay community raved about Hernández’s moves, saying:

“While Hernandez’s moves aren’t gay, his embrace of shaking his backside, and his own willingness to publicly share it, does signal his complete comfort with something many people consider feminine or ‘gay,’…Hernández’s latest is a not-so-subtle message that made the mandate of traditional, straight, macho athletes is fading.”

Here is the video that apparently signaled that Hernández was a star in the making:

“In that moment, our community could’ve told anyone that Hernández was going places. But no one in baseball wanted to listen.”

So obviously, the big takeaway here is that if you can predict whether or not someone to be an incredibly successful athlete simply by seeing them drop it like it’s hot with Reese Witherspoon’s classic dance move on social media, simultaneously breaking down male athlete stereotypes. Good to know!

Obviously, stupidity flows from this situation like water from Niagara Falls and further completely ignores Hernández’s success before landing in Boston.

In a six-year stretch with the Dodgers after his rookie season, Hernández had 400 hits with 68 home runs and 213 RBIs, which granted are not mind-boggling numbers but he was an integral part of one of the most talented rosters in the MLB over the past six years.

Furthermore, he is one of just 12 players ever to have a three-homerun postseason game when he did it in the clinching Game 5 of the 2017 NLCS against the Chicago Cubs.

And while Hernandez might not be the most macho man of all time, it’s safe to say he wasn’t waging a war against toxic masculinity or tearing down the stereotype that male athletes are “traditional, straight, and macho.” All he was doing was something male athletes have done for as long as there have been sports: goof around during downtime.

So despite how firmly members of the gay community might believe in it, there is no logical way to attribute Hernández’s breakout playoffs to a dance move he did two years ago.