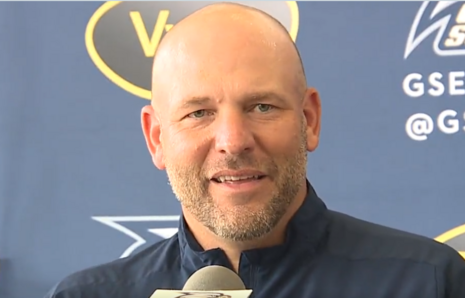 The Georgia Southern Eagles football team has begun the year with a 1-2 record. In a sport as merciless and high-pressure as college football, that can be a major setback for your team’s goals and aspirations and potentially harm your overall morale.

But Eagles head coach Chad Lunsford was not fazed by his team’s predicament, and in a press conference on Wednesday took a faith-based and wholesome approach to his team’s situation.

Lunsford and the Eagles are rightly under a lot of pressure to get wins as quickly as possible. But Lunsford acknowledged that there is only so much he and his staff can control and that he is at peace knowing that he does his best in those areas and leaves the rest up to God.

“I’m a man of faith. I feel that my steps are ordered, I feel that God has a plan for me…So why worry about things you don’t control? I control how we practice; I control the different things we do in practice, we control the depth chart. I have to focus on the things I do have control over.”

Furthermore, Lunsford addressed the pressure his team faces from the fan base to perform better. Again, he showed a remarkable amount of character, positivity, and faith with his response in a situation where other coaches might have caved or made excuses.

“If you’re part of a group that doesn’t care, that doesn’t want to be great that doesn’t want you to win championships, I don’t want to be there. So the way I look at it is, they’ve got every right in the world to be upset, but I’m not going to let it bring me down…we’re going to work every day, and if it’s meant to be its meant to be. I’m not defined by football … it’s not going to define my life. If people don’t like that, it is what it is man. I got one person to please, and that’s God, my Savior.”

Lunsford's full response is below:

What a refreshing monologue from someone in an entertainment culture that is horrifically woke. Coaches and athletes often use those press conferences to make excuses or promote gay pride or some other cancerous agenda. But Lunsford offered a taste of hope for the season not just for the fan base, but for his team as well. Smart coaches will see this press conference and take notes on how to coach their team through difficulties.

Finally, we might just have a sports team worth watching.