Imagine a world in which a professional athlete – in peak physical shape -- could be ridiculed and punished for not taking an experimental vaccine for a disease with a minimal death rate.

Sounds too ridiculous to actually happen, right? Well, not exactly. 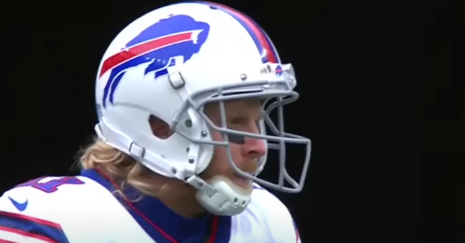 Bills wide receivers Isaiah McKenzie and Cole Beasley already been punished  by the NFL under it's ridiculous mandates. On Thursday, the NFL fined Beasley for an infraction, with the star wideout saying on Twitter that he was “disciplined for not wearing a mask for ‘literally 5 steps’ from the entry door to the locker room after wearing it ‘the whole day.’”

He did not disclose how much the fine was but made sure the public knew he was less than impressed with the decision.

I wore a mask that whole day but got fined because I didn’t have it in from entry door to the locker room. Which is literally 5 steps.

McKenzie was fined $14,650, with the NFL criticizing him by saying in a letter “your conduct potentially compromised not only your safety, but also the safety of others, as well as the league’s ability to ensure that your club’s training camp is conducted in a safe manner.”

The NFL has gone far overboard in creating and enforcing mask mandates. In June, the NFL said that vaccinated players will only have to get tested once every two weeks and will not have to quarantine if exposed through contact tracing, while unvaccinated players will be tested every day and will have to quarantine if they come into contact with someone who had COVID.

The fines for violating the NFL’s protocols could average $14,650 per infraction. That includes an unvaccinated player attending an indoor bar or nightclub or attending an indoor concert or entertainment event. A fine of up to $50,000 applies to more serious violations, such as a player failing to cooperate with an investigation into protocol compliance.

In July, the NFL announced that if a team has a COVID-19 outbreak amongst individuals that have not been vaccinated and causes a game to be postponed and unable to be reschedule, the team with the infected personnel will have to forfeit the game.

But wait, it gets better.

On Wednesday, the Washington Post published an article titled, “For NFL teams with unvaccinated quarterbacks, this could be a long, complicated season.” This piece had all the undertones of discriminating against quarterbacks who have not gotten the COVID-19 vaccine.

The article highlighted how Cam Newton of the New England Patriots, Kirk Cousins of the Minnesota Vikings, and Lamar Jackson of the Baltimore Ravens all have run into trouble with the league’s COVID protocols and are apparently risking the well-being of their teams.

The author, Mark Maske, wrote that “The competitive peril is the greatest for teams with unvaccinated quarterbacks, given the risk of such a team being left without its most important players.”

What this means in normal English: ‘Quarterbacks, get the vaccine regardless of how you feel because you’ll let your team down if you don’t.

Oh and by the way, if you don’t, we will continue to make life miserable for you or anyone else who chooses to stay unvaccinated.’

Football athletes are some of the most physically fit people on the planet. They eat healthy, train for hours every day, and have vast medical resources at their disposal. Of all people, they should be able to fight COVID-19 effectively without taking a vaccine, let alone being punished if they don’t.

The NFL has turned into a microcosm of what is happening in our country today: segregation of “good and bad people” based of vaccination status and beating into submission those who will not comply with their rules.

NFL players who have not been vaccinated should stay strong and do not cave to the fearmongering wackos running the league. If they don’t want the jab, they shouldn’t have to take it, plain and simple.