Get Jabbed To Beat COVID? Soccer Boss Thinks This Will Work, Players Aren't So Sure

American sports leagues are not the only professional leagues that are dealing with a level of turmoil between executives, players and coaches on whether or not to get the COVID-19 vaccine. 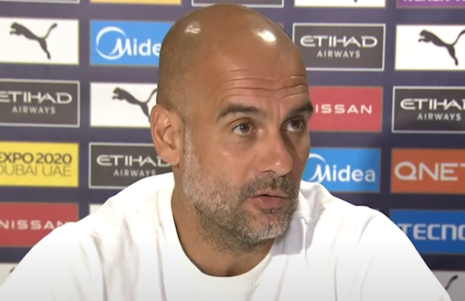 Manchester City boss Pep Guardiola (of the English Premier League) has voiced his opinion that all of his players should get the vaccine in a press conference after his side dismantled Norwich City 5-0 in a regular season match last Saturday.

Guardiola said that the league should “explain to them the benefits or not benefits to being vaccinated or not … after that, everyone is going to decide.”

Had Guardiola stopped here, his take would have been as refreshing to sports media, fans and players as a cool summer breeze.

He then followed up his statement with this last word:

But when all the scientists, all the doctors, all the big specialists of medicine say the only solution to eradicate or help to move forward after two years of pandemic situation is being vaccinated, I think they should consider it.

Guardiola’s call comes in the wake of a mini outbreak in the Arsenal F.C. camp, along with a rise in COVID-19 cases across the Premier League.

Guardiola completely invalidated the first part of this statement with this sentence. He passively told players that if they want to move past the COVID pandemic, the only way through is to get the jab.

However, a vaccine will never guarantee that a disease will go away. After all, people who got the flu vaccine before the COVID outbreak could still get the flu at a later date. According to the CDC, the flu vaccine’s effectiveness varies from season to season and further varies from person to person depending on age, health status, body type, and other factors.

Because of this – and the general uncertainty regarding how effective the COVID-19 vaccine is - the majority of premier league stars – and other footballers in England’s multi-tiered systems -- have said they will not take the vaccine despite urging from top officials and coaches, according to the Daily Mail.

Leon Legge, a defender who plays for Port Vale in the fourth-tier Football League Two in England, said on social media that “People don’t realise that the vaccine hasn’t enough evidence or data to be even be legally called a vaccine.”

What Legge posted on social media could not be more poignant. Medical experts concur that the vaccine has not been tested enough to adequately determine if it is a beneficial treatment for COVID-19, further debunking Guardiola’s position on taking the vaccine.

In the end, COVID might be something that just becomes some new sickness we have to deal with as part of our daily lives. But to say that athletes must take the vaccine in order to fully protect themselves against is is absurd in every sense.