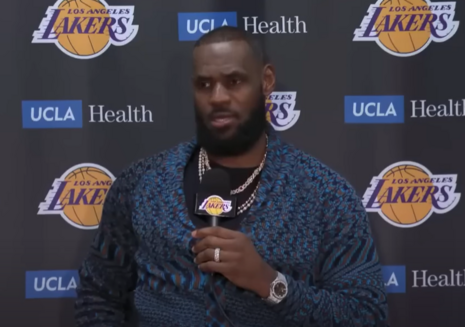 We know that LeBron James is more than an athlete and the Washington Post sports section is more than a sports section. They’ve told us so. On Wednesday night, James took on members of the media in condescending fashion after a Lakers’ game about why they did not question his reaction to an ages-old photo of Cowboys’ owner Jerry Jones watching desegregation efforts in Arkansas.

The NBA’s leading social justice warrior was miffed that the media had recently jumped all over the Brooklyn Nets’ Kyrie Irving for anti-semitism and why Jones wasn’t canceled over a photo of Jones resurrected from 1957. James should have been the go-to commentator on that; just ask him.

“I got one question for you guys before you guys leave,” James said, reversing roles with members of the press. “I was thinking when I was on my way over here, I was wondering why I haven’t gotten a question from you guys about the Jerry Jones photo. But when the Kyrie [Irving] thing was going on, you guys were quick to ask us questions about that.”

The Washington Post’s race-baiting SJW’s (who take a backseat to nobody -- not even James -- in their self-regard) are doing a series castigating the NFL for not hiring more black coaches. Last week the installment centered in on the photo of Jones watching racial intimidation in Arkansas as a 14-year-old boy. Jones was quoted saying he was present to watch the event out of curiosity and he did not participate in it.

The Post headline belittled Jones as a man who transformed the NFL, except when it comes to race. He was photographed in Arkansas during a time of racial conflict, and he’s never hired a black man to coach the Cowboys. He’s risen to power in the confederacy of the pro football plutocracy, the Post story goes, in part based on the cultural effect of Jim Crow of his youth. It’s character assassination at its finest.

Getting back to James, while constantly running interference for his evil Communist Chinese benefactors, he assumed that Jones was guilty of something for just having watched race relations boil over in Arkansas so long ago. Jones also opposed anthem kneeling in 2017, putting a target on his back for social justice warriors. James is no longer the Dallas Cowboys fan he used to be.

Irving was suspended in November because he posted a link on social media to a documentary that included antisemitic tropes, and he has since apologized. The media typically feeds James’ massive ego and sought out his opinion on that issue. He craved for the same attention over Jones.

James whined about the media burying the Jones photo, and he cannot tell the media enough how disappointed it was that they didn’t seek out his opinion on that.:

“But it seems like to me that the whole Jerry Jones situation, photo — and I know it was years and years ago and we all make mistakes, I get it — but it seems like it’s just been buried under, like, ‘Oh, it happened. Okay, we just move on.’ And I was just kind of disappointed that I haven’t received that question from you guys.”

Let’s review. James assumes – without any proof – that Jones engaged in racism as a boy and as the Cowboys’ owner. But who’s got the more verifiable racist past?

In 2017, James reported he’d been the target of racist graffiti sprayed on his California home, but an investigation found no such thing. On Twitter, he targeted a white Ohio police officer who shot a black teen to death, stating “You’re next.” U.S. Sen. Tom Cotton (Rep-Ark.) accused James of a dangerous remark inciting violence against the officer.

LeMore Than An Athlete James thinks he’s helping blacks with his incendiary remarks about race, but in reality, he’s just fanning the flames of his own racism.