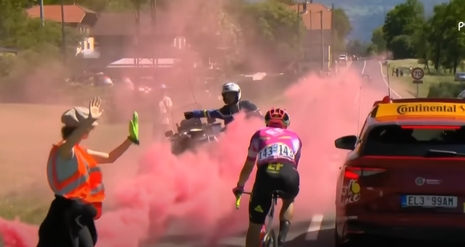 Remember sports without disruptions? It seems like the concept of a bygone era. In just the latest episode of incidents stretching back to anthem kneeling, the Jacob Blake boycotts, Black Lives Matter protests and more, climate change nuts blocked the road Tuesday at the Tour de France. These idiots claimed the “climate crisis” will exterminate planet Earth in less than a thousand days.

Nine climate kooks brought the 10th stage of the Tour de France to a halt for 15 minutes. Alberto Bettiol, of Italy, was in the lead of the race in the Haute-Savoie region of France, and he had to swerve around the protesters. The race was stopped at that point and re-started after the protest was subdued.

Protesters lit flares sending smoke across the road and obscuring visibility for oncoming cyclists. They also tried to glue themselves to the road. Chained together, they wore shirts declaring, “Only 989 days left to save our future.”

Current climate conditions will exterminate the planet – apparently if world leaders don’t take drastic actions before then, the activists said.

The radical group Dernière Rénovation claimed responsibility for the protest. It’s a French climate activist group demanding that France renovate all buildings to make them more energy efficient by the year 2040, according to Politico.

One of this group’s fools, Alice, handed out a news release encouraging people to “act and enter into civil resistance today to save what remains to be saved.” Alice said:

The reality is that the world towards which politicians are sending us is a world in which the Tour de France can no longer exist.

Our goal is to force legislation to drastically reduce France’s emissions, starting with energy reform, the area most likely to bring together social and climate justice today.

This was Dernière Rénovation’s eighth highway blockage since April 1. A woman associated with the doomsday nitwits also chained herself to a net at this year’s French Open tennis tournament.

French law enforcement officials arrested the protesters, and some were reportedly maced.