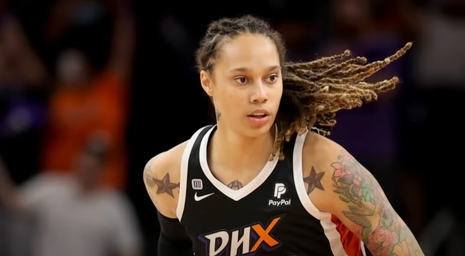 The towering, 6-foot-9-inch Griner was arrested in February at a Moscow airport for attempting to board a plane while carrying drugs. "I'd like to plead guilty, your honor,” she said Thursday in court. “But there was no intent. I didn't want to break the law."

The U.S. government might want to walk back its “wrongfully detained” statement issued this spring. With her guilty plea Thursday, Griner certainly didn’t take that approach in her appearance before the judge.

Media reports say Griner could do a 10-year jail sentence, and she recently said she fears she could be locked up forever. Her lawyers hope it won't come to that:

"Considering the nature of her case, the insignificant amount of the substance and BG’s personality and history of positive contributions to global and Russian sport, the defense hopes that the plea will be considered by the court as a mitigating factor and there will be no severe sentence.”

Yep, personality and global contributions to sport should sway the Rusky judge that Griner’s offense isn’t as bad as it looks. "Brittney sets an example of being brave," her legal team said. “She has decided to take full responsibility for her actions as she knows that she is a role model for many people."

"What we do know is that the US State Department determined that Brittney Griner was wrongfully detained for a reason and will continue negotiating for her release ... the (Biden) administration needs to know that this powerful collective is behind them and supports whatever needs to be done to get BG, Paul Whelan (a former U.S. Marine imprisoned in a Russian labor camp since 2018 arrest on espionage charges), and other detained U.S. nationals home right away."

The Russian Foreign Ministry announced Griner can appeal her verdict or apply for clemency. It also rejected the “wrongfully detained” argument.

Rebekah Koffler, a former U.S. intelligence officer and an expert on Russia, told Fox News Digital Wednesday that Russia is unlikely to give Griner clemency. It’s a highly charged case, and the detention and “sham trial” can be used as a bargaining chip for a prisoner swap. “They will drag on the entire process, including appeal, simply as a negotiating tool to get what they want out of the Biden administration," Koffler remarked.

Griner is due back in court July 14, and if her lawyers are smart, they’ll drop the “wrongfully detained” and “role model” hooey.