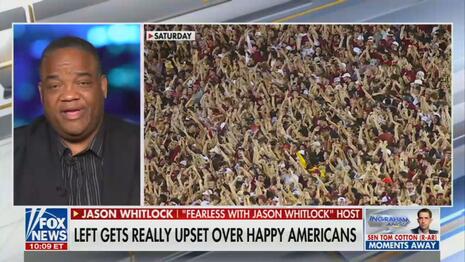 During the Ingraham Angle’s segment on the “Left Gets Really Upset over Happy Americans,” Whitlock explained what it meant for roaring fans to fill up college football stadiums last weekend.:

Dr. Fauci did indeed cast aspersions on these Americans who’ve been told for 18 months they may or may not be able to attend church, have small Fourth of July gatherings and that their work is not essential.

“I don't think it's smart,’' Dr. Fauci said Tuesday on CNN in reference to football stadiums filled to capacity. ‘'Outdoors is always better than indoors, but even when you have such a congregate setting of people close together – you should be vaccinated.'

Dr. Downer also stated that now is not the time to get back to normal, and he predicted more vaccination mandates, even though vaccinated people are contracting coronavirus. ‘'We could be stuck in outbreak mode and that's why I think what you're going to be seeing is … a lot more local mandates.

Whitlock pointed out the amazing hypocrisy of the Left when it comes to large gatherings of people in the age of COVID-19.:

“Every protest, every rioting, looting deal that was done in the summer of 2020 … COVID concerns all disappeared and that was perfectly fine. But going to a football game and supporting some of our best and brightest athletes, oh, this is terrible, this isn’t a good idea.”

The American people are tired of being trapped in a “game of fear and control that’s being played by Fauci and a lot of politicians on the Left,” Whitlock added. People understand the reality of COVID-19, as well as the fact that we’re going to have to live and deal with it. Rather than living in fear.