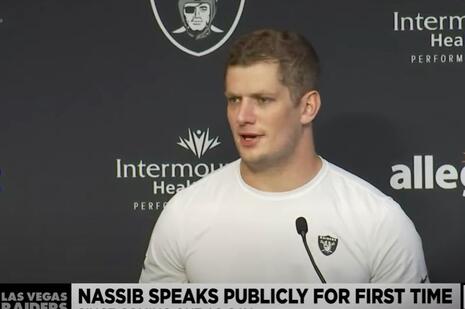 The most strident LGBT voices in sports are crowing about Carl Nassib becoming the first openly, active out football player in NFL history. At the same time, SB Nation Outsports is griping and moaning that – yet again – there will be no out men’s tennis players competing in the U.S. Open.

Carl Nassib thrilled the Left when he came out of the closet in June. “(I)t was the biggest story in sports for a few days,” Jim Buzinski crowed on the Outsports blog Tuesday. Yes, to a gay sportswriter it was. The rest of the world, not so much.

In announcing their 53-man roster for 2021, the Las Vegas Raiders on Tuesday assured the LGBT world that Nassib made the final cut. He’s going to be the first openly homosexual player in NFL history when the Raiders host Baltimore Sept. 13. Yabba dabba do.

Nassib was expected to make the team because he’s in the second year of a three-year contract worth more than $25 million. He’ll be, according to fanboy Buzinski, “a key back-up defensive end.” The NFL wasn’t kidding this summer when it released a wacko video claiming football is gay, queer, transgender and lesbian.

It’s a good bet that Nassib will be the toast of the NFL to the Left, so starved for the homosexuals, lesbians, transgenders and non-binary types who make their crazy world go round.

On the flip side of the NFL’s joyous news, Buzinski said he was compelled “to rehash this depressing statistic: There will once again be no openly gay male players at one of the sport’s premier events.” This was in reference to the U.S. Open tennis tournament in New York.

There is no Carl Nassib there to thrill the LGBT alphabet people, and that’s cause for grave concern Buzinski said of the sport that’s stuck in the stone age:

“The absence of out male pro tennis players is noteworthy in a summer that saw the first gay NFL player and gay NHL prospect come out and a record number of out LGBTQ Olympians, including the most men ever. These developments make men’s pro tennis look like it’s stuck in a prehistoric age.”

The women’s tennis field in the U.S. Open is also a source of bitter consternation for LGBT sports writers. Alison van Uytvanck and Sam Stosur will play in singles competition, but that’s it for lesbians. Rather than race at the moment, sports are currently all about the sexual orientation of who’s chasing down quarterbacks and making forehand smashes.

Who better to qualify the LGBT shortage in the U.S. Open than some obscure former college tennis guy? Brian Bradley, a former Catholic University tennis player who’s also queer, offered much valued perspective on this sad state of affairs:

“There are no out gay players on the ATP tour because most players don’t pick up a racket in hopes to be a role model for an entire marginalized community. It takes a special personality to both thrive in a professional sport AND live authentically as a gay man. Tennis is an individual sport. For so long gayness has been attributed to weakness — this can alienate a player from coming out.”

What’s really surprising is that in the year of the trans athlete, there are no males competing in women’s tennis at the U.S. Open. At least not yet, but give it time.