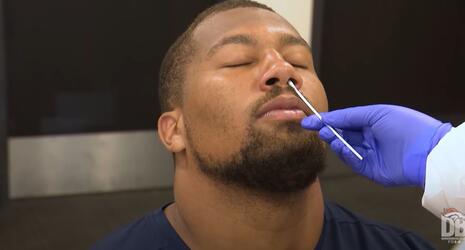 The micro-managing, freedom-stifling NFL control freaks are going way out of bounds in newly announced vaccination requirements. The league on Wednesday released a list of 10 ways it can punish teams without a full roster of vaccinated players.

SB Nation reports teams without 100 percent of their players vaccinated “will have a much, much more difficult season under new rules.” Along with: “Players can still choose not to get vaccinated, but they’re not free from consequences.” Both are huge under-statements.

The NFL’s new guidelines are so petty that they extend to family interactions and player use of team cafeterias, weight rooms and saunas. Fully vaccinated teams don’t have any restrictions in these regards. However, teams below the 100-percent vaccination threshold are restricted in those areas and several others.

The politically incorrect teams will be tested daily (Denver's Bradley Chubb gets tested in above photo), and everyone must wear masks at team facilities and on road trips. Players exposed to COVID-19 must self-quarantine, and unvaccinated players will be banned from social, media, marketing and promotional activities. On road trips, they’ll be confined to their hotel rooms and cannot interact with family members or others.

Teams will be fined $14,650 for most violations, such as an unvaccinated player appearing at indoor places and events. Violations considered by the league to be more serious can draw a fine of up to $50,000. This could be applied to a player not cooperating with an investigation of protocol compliance. The league promised strict enforcement of the protocols.

The NFL said the new guidelines reflect “updated guidance from the CDC.” The NFL Players Association agreed to all these ridiculous rules.

SBNation’s James Dator wrote: “While many teams are claiming 100 percent of their front office, and support staff are fully vaccinated against the virus, the numbers for players are lagging woefully behind, estimated to be under 50 percent league-wide.” Lagging woefully behind? How’s that for an editorial comment masquerading as straight news?

It’s fair game to say some of these draconian rules challenge individual and civil rights. The Cincinnati Bengals running back Joe Mixon raised this issue in a series of Tweets. He wrote: “I thought Football was a team sport and it’s clearly being individualized by beliefs...”. Outkick blogger Clint Lamb suspects many players agree with Mixon’s take on the NFL’s harsh and coercive crackdown on the un-vaccinated.

Lamb suggested the NFL is over-stepping its bounds and it’s not the first time.